The appointment was confirmed by the finance minister on Friday.

William Gerald Mutumanje, better known as Acie Lumumba, will chair the ministry’s ‘Communications Taskforce’ and will be expected to work three days a week.

It remains unclear how Mutumanje, an ardent cheer leader for President Emmerson Mnangagwa, was engaged and whether the post was ever advertised. Other members of the taskforce were not identified.

“This letter serves to appoint you as chairman of the Ministry of Finance and Economic Development Communications Taskforce,” Prof Ncube said in his letter to Mutumanje.

“The (task-force) will reimburse you for all your reasonable and properly documented expenses that you incur in performing the duties of your office.

“It is my expectation that you will bring your experience in leadership and communications strategy to improve the communication between my office and the people of Zimbabwe.”

Mutumanje has previously been accused of improperly helping himself to government youth funds and has also been before the courts on various other allegations.

A sex tape of the former youth council leader was also leaked to the media in 2016 after his Harare home was raided by the authorities.

Mutumanje had, at the time, become a critic of then president Robert Mugabe and described the leak as an attempt to silence him.

In a defiant statement, the activist said; “When I left Zanu PF and spoke out, I knew that the less intelligent members of the party will come after me, trying to silence me. I was ready.

“If you think that the disclosure of these recordings will silence me – guess again. It will make my audience wider and me more fierce.”

Meanwhile, his appointment comes at a time the finance minister’s fiscal and monetary interventions are being blamed for the current shortages of basic commodities as well as resurgent inflationary pressures.

The minister says the tough measures are necessary to help put on the path to recovery an economy in crisis for nearly two decades. 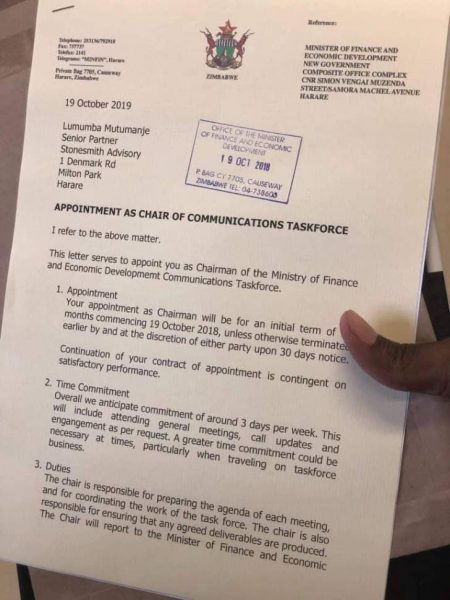