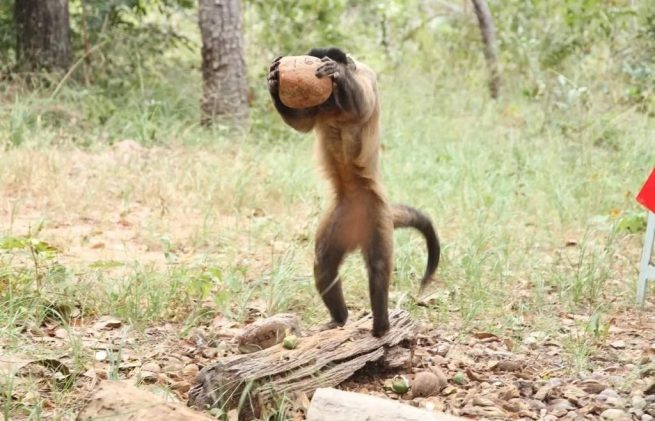 A pensioner was stoned to death when aggressive monkeys hurled bricks at him.

Dharampal Singh (72), from Uttar Pradesh, India, was apparently collecting firewood when the animals started dropping bricks on him on Thursday, 18 October, the Times of India reports.

The monkeys reportedly fetched the bricks from a crumbling building.

Dharampal, who was hit on the head and chest, tragically died in hospital, Metro reports.

The deceased’s brother, Krishnapal Singh, said the family would lodge a complaint with local police.

“Monkeys threw more than 20 bricks at Dharampal on Thursday,” he said.

“He was hit on the head, chest, and legs.

“Thrown from quite a height, the bricks were enough to kill him. These rogue monkeys are the real culprits and must pay for it.”

But local police said they couldn’t open a case against the monkeys and declared the elderly man’s death an accident, The Sun reports.

According to experts, fatal monkey attacks are on the rise in India, with the rhesus macaques species being the main culprits, Sky Newsreports.

A man in India has died after a group of monkeys reportedly pelted him with bricks from a tree.

Dharampal Singh was collecting pieces of dry wood in Tikri, Uttar Pradesh, when he was struck by the bricks, which hit his head and chest.

The animals had collected the bricks from a dilapidated building nearby, according to The Times of India.

His family have now lodged a formal complaint about the incident with officers at Doghat police station in Uttar Pradesh.

Officers are refusing to proceed with a case against the animals.

“He was hit on the head, chest and legs. Thrown from quite a height, the bricks were enough to kill him.

“These rogue monkeys are the real culprits and must pay for it.”

“How can we register the case against monkeys?” said Chitwan Singh, station officer at Doghat police headquarters.

“This will make us a laughing stock.”

Villagers have repeatedly complained about monkeys causing havoc in the area and told The Times of India there was no solution in sight.

Parts of India have a well-documented problem with aggressive monkeys.

In April, a newborn baby was reportedly snatched from his home in eastern India by a monkey.

The infant was later found dead in a well.
Support free-thinking journalism and subscribe to Independent Minds

In 2007 the deputy mayor of India’s capital, New Delhi, died following an attack by a horde of monkeys.

SS Bajwa fell during the attack from a first floor balcony and later died of head injuries, in an incident that made headlines worldwide.