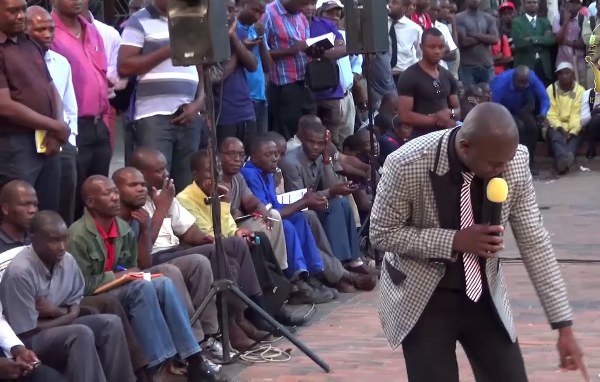 Controversial preacher Apostle Talent Chiwenga — known for his uncanny prophecies about the country’s political situation — now fears for his life after Vice President Constantino Chiwenga issued a stern warning against him for attacking the national leadership.

In a video recording, the clergyman who claims to be cousin to President Emmerson Mnangagwa’s second-in-command, prophesied recently that two senior government officials will lose their lives.

He went on to allege that the vice president, who is on sick leave after falling ill with an undisclosed ailment, was not fit for office.

In his latest recording, the man of cloth gave a narration of how he was forcibly interrogated and threatened by security officials in Hwedza, where Christians had gathered over the weekend to pray with the vice president at his rural homestead.

“… I now fear for the lives of my children, my wife and those that I work with. If I die today, people of the world I want you (to) know, this is the reason why I am going to die,” said the cleric.

“The vice president has got so many resources at his disposal, I may die through an accident, I may be shot dead, I may be poisoned, I may disappear, like Itai Dzamara disappeared. I am not saying the vice president is the one behind the disappearance of …Dzamara, I am simply mentioning the name of .. Dzamara because he also disappeared, because he also criticised a government that feels it is invincible, it is unquestionable to the people that it governs.

“I don’t believe that should be the case sir, this is a democratic country and you have also been on record, insulting other people, insulting other politicians and nobody has said anything about it, because maybe they were afraid of you,” Talent said.

Talent came to prominence after a series of pre-elections predictions where he claimed the election would be rigged and that a number of senior officials linked to the November 2017 coup would die in quick succession.

He said he did not fear Chiwenga but respected him and was not afraid of dying for speaking what God would have told him.

Last week, Chiwenga launched a scathing attack on Talent describing him as a fake prophet who is bent on criticising his elders using God’s name.

“There are others who are now calling themselves prophets,” said VP Chiwenga. “Aripo uyo anonzi ani, (there is someone called) Talent (Muzuva). That should come to an end today. Zvatoperera pano (It’s over from now). We don’t have that culture where one moves around attacking leaders under the guise of preaching the word of God. God does not say move around attacking other people,” Chiwenga said.

However, Talent said he loved the vice president as his brother, but was against some of the actions by government such as chartering former first lady Grace Mugabe a plane to travel to Zimbabwe from Singapore for her mother’s funeral and the killing of at least six people during the post-election violence.

He said he still maintained this was improper, considering that thousands of people are suffering.

“Now, when he said Talent Muzuva on Sunday, I knew he was talking about me, because Muzuva is my father’s name and Guvheya is his father’s name and our fathers are brothers, blood brothers, same father, Chiwenga is not his personal name, Chiwenga is a family name. The one who was called Chiwenga is our grandfather. So, maybe he was not willing to use the name Chiwenga because he also uses it, but I know that so many people are confused, they do want to know what is happening and the reason why I am making this public statement, it is because I feel that my life is in danger, not only because of what he is doing, but most importantly because of what happened to me on Saturday,” he said.

Talent said he is ready to die for speaking the truth, however, he begged his cousin not to harm his wife and children, claiming this was a family issue that needed to be dealt with privately.

“If he says he doesn’t know me he would be lying; I have met with him more than twice, more than thrice. In my life, I have spoken to him even over the phone, even his wife… knows us, me and my wife. We have gone to see her at her offices because this is a family issue. But if I feel that my life is in danger and the life of my wife and children, I cannot keep silent while the vice president uses all the resources that are at his disposal,” he said.

Responding to the cleric, deputy Information minister Energy Mutodi said while government respects the right to freedom of expression as enshrined in Section 61 of the Constitution, one needs not to infringe into other people’s rights and liberties when exercising his or her own right.

“There is also freedom of worship and freedom of association. However, one needs not to infringe into other people’s rights and liberties when exercising his or her own right,” said Mutodi.

“If you are preaching to your church and you are a pastor or religious leader, you certainly do not want to call names of political leaders and denigrate them as if you were a leader of a rival political party. That is wrong”.

Section 51 of the Constitution states that every person has inherent dignity in their private or public life, and the right to have that dignity respected and protected.

Section 57 (e) of the Constitution goes further to give citizens the right to privacy and forbids anyone from disclosing another person’s health condition.

“So when you call out the name of a whole vice president in the streets and purport to disclose his health condition, you really act outside the law. Such behaviour constitutes high levels of disrespect and may arouse public anger and disorder, considering that politicians have supporters who follow them.

“So our position as government is that the pastor needs to be called to order and desist from infringing into other people’s rights. He is free to form a political party or to join already existing ones and must not hide under the church to further his own political ambitions or beliefs,” Mutodi.