Former Deputy Finance Minister Terence Mukupe has ignited a new HIV row on Twitter, after appearing to suggest that Parliament is filled with people living with HIV.

The foul-mouthed former Harare East MP was reacting to claims by the preacher Walter Magaya that he had found an HIV cure.

“Why don’t we give Magaya 10 MPs whom he can treat publicly?,” Mukupe said in a tweet which drew fire from Zimbabweans. 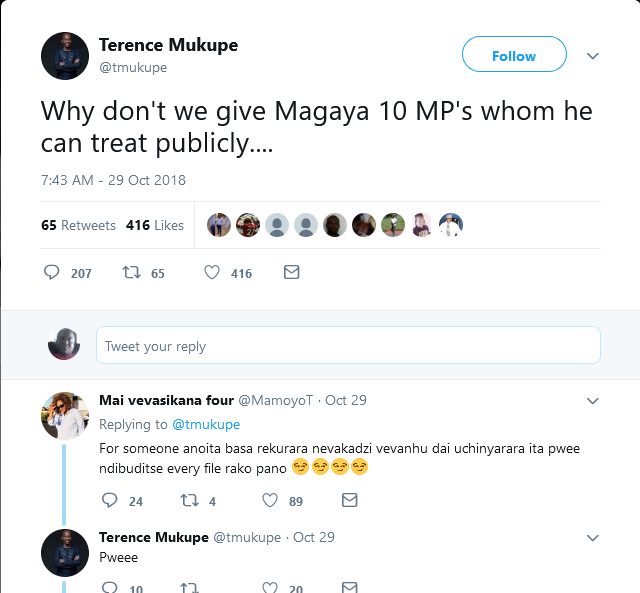 Mukupe was accused of being insensitive to the plight of HIV sufferers – and he has form. In a May radio debate with Tendai Biti, the man who beat him in Harare East, Mukupe reacted to an attack by the MDC top official by asking him if “he took his ARVs today.”

Mukupe was widely condemned then, with HIV/AIDS activists accusing him of promoting the stigmatisation of people with HIV.

But it appears the Zanu PF politician cannot resist an HIV slur, following his latest outburst.

“There he goes again laughing at the affected,” said @Patienc88250572, who calls herself Advocate on Twitter.

“Three things you should never use to despise others: 1. Money 2. Health 3. Children,” counselled Shepherd Makala (@shapducks).

Journalist Ntungamili Nkomo also showed his disgust, telling the former bank employee: “How about morons first. And you lead the way?”

Magaya claimed at a news conference on Sunday that he had found the cure for HIV, which has eluded scientists since 1981.

The Zimbabwe government says Magaya did not follow procedure for registering new medicine, and his claim is being investigated with urgency.