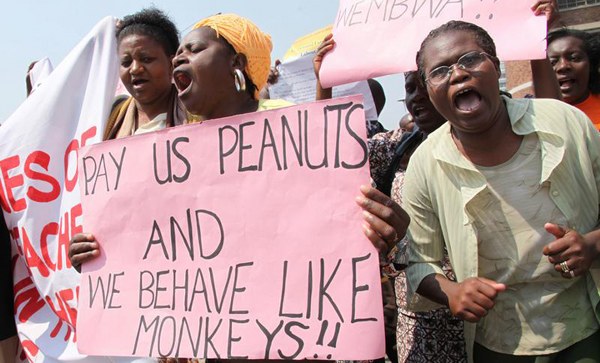 CIVIL servants have demanded salaries in United States dollars following the price increases and rejection of the bond note and electronic transfers by some shop owners and service providers.

“We demand that our salaries be paid in United States dollars since some shops are not accepting any other form of payment. We also call on the government to adopt flexible duties for the nurses.

“For example, nurses can work from 7AM to 7PM working shifts for three days a week instead of the current 7AM to 4PM for five days a week to mitigate increased transport costs,” said Mr Dongo.

He said the cost of basic commodities, transport, accommodation and the general cost of living have risen by almost three fold in local bond notes to meet the original US$ value.

“This development has impacted negatively on our membership whose salaries are sadly still pegged in local bond notes and worse still in Real Time Gross Settlement format,” said Mr Dongo.

According to him, service provision in public health institutions has also been compromised because of the drug and resource shortages, making it difficult for nurses to effectively discharge their duties.

Zimta secretary general Mr Tapson Nganunu Sibanda said the association was piling pressure on the Government to seriously consider paying them in foreign currency so that they are in a position to meet their daily monetary commitments.

“Having observed that we have been hardest hit by the recent monetary pronouncements and measures, we’re no longer in a position to meet our daily monetary commitments and are therefore incapacitated.

“We’re therefore calling for an immediate cushioning of teachers through payment of salaries in foreign currency,” aid Mr Sibanda.

He said their demands were justified looking at the recent price hikes that had impoverished most people in the country.

“Our demand is informed by the fact that teachers can no longer afford to pay for daily commuting to work, buy food, rentals, and medical bills as all service providers are demanding payments in foreign currency.

“The Government must be reminded that teachers have already been earning below poverty datum line (PDL) salaries and as such were worse off before and are now incapacitated. Our current salaries can no longer sustain our mere existence as teachers in Zimbabwe,” said Mr Sibanda.

He urged Government to heed their plight in order to maintain sanity in the education sector.

“I fully understand the difficult situation of civil servants in the current economic climate.

“We’re engaged with the unions and the labour office to find a way forward,” said Dr Nzenza.