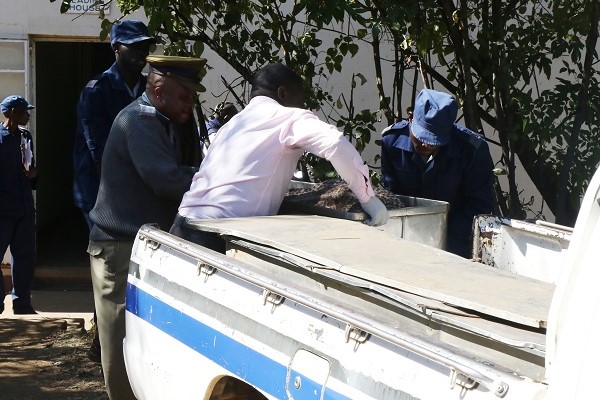 A RUSAPE cop was last week strangled to death by his estranged wife who tried to cover up the heinous crime by pouring a poisonous liquid into his mouth to make it appear like suicide.

Luck eluded the suspect Angeline Gashu (34), when an alert Dr Thomas Nyamudya, of Rusape General Hospital, observed some bruise marks on Richmore Tsuro's neck and referred his body for pathological examination in Harare.

The pathologist discovered that Tsuro had died of strangulation.

The two's marriage had been on the rocks with Gashu accusing Tsuro of infidelity.

Gashu has since been arrested and appeared in court facing murder charges.

She was not represented when she appeared before Rusape magistrate, Mr Shane Kubonera, who did not ask her to plead.

She was remanded in custody to November 13 and advised to apply for bail at the High Court.

When she realised that he was dead, she poured some poisonous substance into Tsuro's mouth and put the container close to the body.

"The accused and the now deceased were wife and husband, residing at ZBS 2194 Vengere, Rusape. On October 27, 2018, at around 0500hrs, Gashu had a misunderstanding with her husband over infidelity. She argued that her husband's girlfriend was calling her on her (Gashu's) mobile phone.

"Gashu then used an unknown object to strangle Tsuro to death. Upon discovering that she had killed him, she tried to cover up the offence by putting the body on the floor and pouring a yet to be identified poisonous substance into his mouth. She then placed small container beside his body to make it appear like suicide by drinking the poisonous substance," he said.

Mr Mutigwa said after stage managing the suicide, Gashu went to her sister's house in Mabvazuwa but remained tight-lipped about the matter.

"At around 2100hrs, Gashu went to Tsuro's workmate, Clarah Mwadiwa purportedly looking for Tsuro. She persuaded Mwadiwa to accompany her home and assist to fit a bulb in her bedroom.

"Upon entering the bedroom, Mwadiwa lit her cell phone torch while Gashu was fitting the bulb. In the process Mwadiwa noticed Tsuro lying on the floor facing upwards and they quickly left the room to alert his other workmates.

"On October 30, 2018 a post mortem was done by Dr Yehilyn Iglesias, who concluded that the cause of death was mechanical asphixia or secondary neck constriction," said Mr Mutigwa.

Videos & Pics Edmore Huni - 26 September 2020 0
PRESIDENT Mnangagwa yesterday condemned the killing of children for ritual purposes, saying the Government was concerned with all forms of threats and abuse to...
Loading...