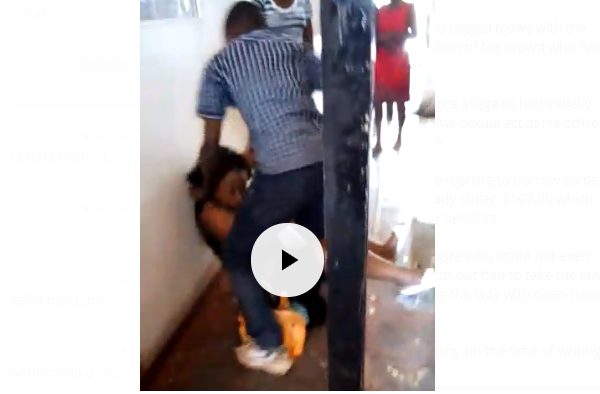 A DIRECTOR of a security company that offers services at many government premises lost his cool in court yesterday and started assaulting his estranged wife after being convicted of failing to pay $42 400 maintenance money for his three children.

Levieson Pamuchigere (44) was irked by magistrate Trevor Nyatsanza’s decision to convict him and then ordering him to pay a $2 000 down payment before 3pm yesterday.

After Nyatsanza finished delivering his ruling, Pamuchigere grabbed his ex-wife by the neck near the exit door of the court gallery and attempted to slap her with his palm before a prison guard and a court orderly intervened to stop him from further beating her.

Pamuchigere tried to flee from the court, but police officers followed him outside the court building and arrested him.

He was charged under case number RRB 3420165 at the court and accompanied to Harare Central Police for processing of the new charge.

The court heard that Pamuchigere, of Nharira Views in Norton, was ordered by Harare Civil Court magistrate on October 18, 2013 to pay school fees for his three children with former wife Catherine Pamuchigere.

However, the convict defaulted paying maintenance for the period extending from October 18, 2013 to July this year, accruing a debt of $42 400.

But Pamuchigere, in his defence, denied ever failing to pay maintenance. He told the court that he paid a total of $95 000 to the complainant and showed the court the evidence.

The complainant counter argued that the $95 000 payment was her salary, saying she was a secretary at Role Security.