A British journalist Jason Burke has claimed that he survived the 1 August bloody election violence that left 6 civilians dead when the military was dispatched to restore law and order in the streets of Harare. 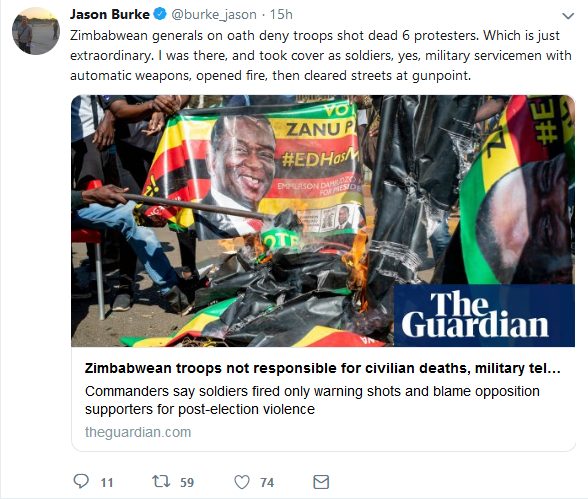 Burke was commenting on the statements by the Zimbabwean military Generals who are denying that the army shot any bullets directly to the protestors.

The tactical commander of the military unit, Brigadier General Anselem Sanyatwe, told the commission he suspected militant opposition activists who deserted from the army could have shot at protesters, a claim repeated by Sibanda.

When presented with a photo of a kneeling soldier who appeared to be aiming at protesters, Sanyatwe said “the man took that position because he was avoiding missiles that were being thrown at him.”

Jason Burke is the author of several non-fiction books. He is a correspondent covering Africa for The Guardian, he is currently based in Johannesburg, having previously been based in New Delhi as the same paper’s South Asia correspondent.