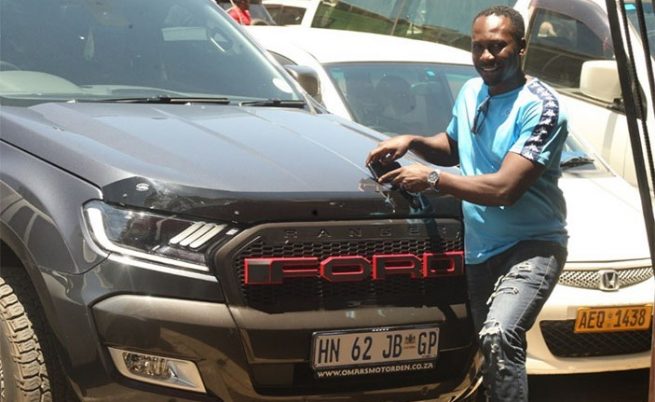 The 35-year-old, who drove all the way from South Africa direct to our newsroom, was shocked by reports he was ready to pay lobola for the Sexy Angels boss. The Kwekwe-born miner said their relationship was purely business and nothing more as was claimed by sources.

“Firstly, I want to clear myself and set the record straight that I am not dating Beverly as was reported,” said Boss Bvola. “The story has really tarnished my image because I am actually dating a Zimbabwean girl in South Africa. “The majority of Zimbabweans in South Africa now know the story and back home my parents were equally shocked that I was dating Bev.

“My real girlfriend was the one who showed me the link to the story and I had to drive straight away to Zimbabwe after learning about the story.

“I was very angry when I read the story and I want you to give me the source of information.”

Boss Bvola denied reports he had introduced Bev to some of his relatives.

“I was also shocked to hear that I introduced her to my relatives because I’m dating a new girl. Of all the people in the world how can I date Bev really?” he fumed.

Asked how the pictures of him all over Bev leaked, Boss Bvola said: “I hosted them in Witbank and decided to go for drinks with them like what I normally do with most artistes I host here like Nox and Ricky Fire.

“As we speak right now, Ricky Fire is at my house and I host him like a brother. In this case, Bev requested for the pictures as we were having drinks and I suspected she is the one who leaked them. If it is not Bev, then it should be one of my friends I had at that event.”

“I also suspect she might have leaked them to gain relevance since I heard she loves cheap publicity.”

Despite the alleged affair with Bev which he said has tarnished his image, Boss Bvola said he would not stop assisting her.

“As I said that our relationship is purely business, I won’t stop hiring her for shows but I will be a bit cautious this time around.

“I have known the other side of hers and I will be careful to protect my image.”

“By the way, I am into coal and chrome mining in South Africa and other Zimbabwean businessmen were shocked. However, I am happy that I have managed to clear my name,” he added.

Back home, the mechanical engineer is also into property development in Kwekwe. He also pledged to invest in his homeland and he has interests in property and real estate. Meanwhile, South Africa based Nox Guni and Ricky Fire have composed songs which they dedicated to Boss Bvola.