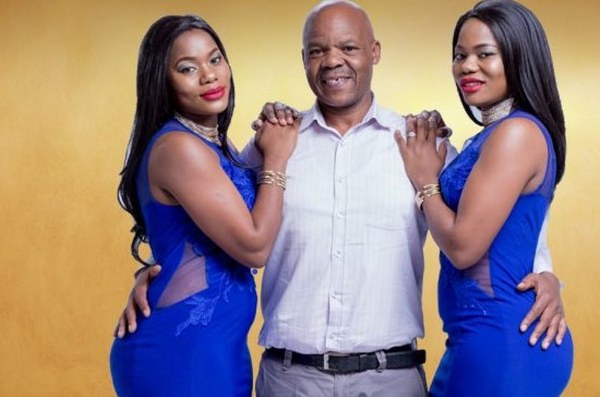 TWIN sisters who are married to the same man want to make a reality show about their life.

Owami and Olwethu Mzazi (28) from Roodepoort in Joburg told this publication that a lot of people asked how their marriage to Mzukiseni Mzazi (54) worked and they believed a TV show would answer these questions.

Speaking to the SunTeam during a visit to Durban over the weekend, Owami said: “We would appreciate support and funding to make the show a reality.”

She said they had made a calm home life for their husband and two daughters.

“We grew up doing everything together and we were never separated. Some people even told us we would marry the same man and this ended up happening. While some people find this strange, we love and enjoy every minute of it,” she said.

Owami said they met their husband in 2011 when they were extras on Muvhango.

“Our husband was our mentor at the time but he fell in love with us. We got married in 2012 and started living together. We got pregnant at the same time,” she said.

Olwethu said they married the same man because their souls were joined.

“We would not have wanted another life. We grew up not wanting anything or anyone to separate us. If we had different husbands, we would not be happy.”

Olwethu said most people were shocked when they heard about their life.

Their husband said he supported the idea 100%.

“I’ve submitted a proposal and one big broadcaster is interested. If it all goes well, we might start shooting in January,” said Mzukiseni.