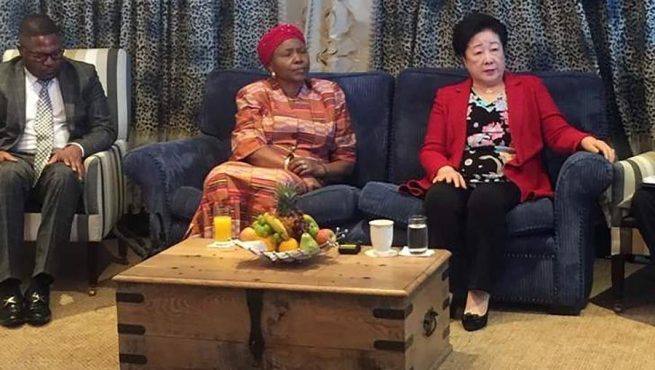 THE GOVERNMENT on Tuesday launched a spirited defence of its decision to invite and host a controversial South Korean cult leader.

Hak Ja Han of the Family Federation for World Peace and Unification will be the guest of honour at a “Peace and Family Festival” being held at the National Sports Stadium in Harare on Wednesday, which will be attended by President Emmerson Mnangagwa.

Organisers of the event claim 40,000 couples from over 200 countries will rededicate their marriages at a huge ceremony – but Zimbabwean church leaders issued statements warning Han’s beliefs and teachings could lead Christians “astray”.

In a pastoral letter, the Evangelical Fellowship of Zimbabwe said it does not “share the same beliefs and values with the hosts of the Peace and Family Festival.”

ZAOGA Forward in Faith Ministries leader Ezekiel Guti, in a statement, asked “all churches to pray a prayer of protection from the cult coming into Zimbabwe that will destroy and lead believers astray.”

But the Information Ministry defended her presence, stating in a statement: “Zimbabwe has been blessed to host many international religious conventions that opened the way to religious tourism. The government welcomes Dr Han and her Peace Festival team.

“Over the years, various mainline and Pentecostal churches have made significant headway in not only drawing international delegates to Zimbabwe, but spreading messages of hope, faith and peace.”

At the heart of the animated reaction from Zimbabwean church leaders is the doctrine of Han’s cult, which elevates her to the levels of the Messiah.

Her husband, Sun Myung Moon, the founder of the cult, died in 2012. Before his death, the cult announced that “True Mother was elevated to True Father’s level horizontally.”

She was supposed to be the “True Mother” who would reverse the fall of man by bearing children from a sin-free bloodline and lifting the curse of Adam and Eve. But, after marrying the 40-year-old Moon in 1960 at just 17 and giving birth to seven sons and seven daughters, Han would be the one to take control of her husband’s church, along with his multibillion-dollar global empire and his spiritual legacy.

The cult’s substantial assets have, over time, included a shipbuilding operation, seafood company, vast real estate holdings including the New Yorker Hotel, The Washington Times and Pyeonghwa Motors in North Korea. In South Korea, the cult-owned conglomerate Tongil Group deals in everything from ginseng to guns.

The cult claims to have three million members worldwide, including 100,000 in the United States.

Founded in Korea’s southern port city of Busan in 1954, the Unification Church grafted Christianity with Confucianism and anti-communism. Moon, who fled his native North Korea after the war broke out, made shrewd investments in manufacturing and real estate in South Korea, and his fortunes snowballed with the post-war economic boom. “Money accumulated through business is sacred money,” he wrote in his 2009 autobiography.

Some viewed daughter In-jin as a possible successor despite the Confucian-Christian penchant for male leadership, but she retired from public life in 2012 following her divorce and remarriage.

Hyun-jin and Hyung-jin, both Harvard graduates and both leading contenders for control of the family empire, are estranged from their mother. Hyun-jin is being sued for allegedly embezzling millions of dollars in cult funds. Hyung-jin, stripped of all leadership roles after his father died, was exiled by his mother.

She reportedly does not visit countries without the written invitation of the Head of State of that country – and for a pariah like Zimbabwe, the arrival of a billionaire and her well-heeled cult followers is not an opportunity to miss with the short term economic benefits it brings.