A conservative calculation, based on current Zimra import duty receipts, indicates that Finance Minister Mthuli Ncube’s new policy will add up to US$300,000 to the daily foreign currency demand on the parallel market.

It is not possible to accurately ascertain how much this foreign currency demand will go up as a number of imports are funded by the diaspora. Of the local component, it is also possible that demand for imported goods will fall as individuals will find the new regime prohibitively expensive.

The immediate effects are easily understood by applying the o-level principle of supply and demand. This additional demand against limited foreign currency supply will result in an increase in the cost of the US dollar. This in turn will have ripple effects on imported goods that are exempted from foreign currency duty payments but purchase their foreign currency on the parallel market. Expect price increases across-the-board.

It must be noted that a number of selected goods will also require import duty to be paid in foreign currency (see PDF below). These include grapes, wine, cheese and other goods targeting the middle class. The price of these goods will go up significantly.

This will result in a significant decline in the standard of living of the relatively insulated middle class and will be followed by demands for salary increases. How will Steward Bank respond when a middle level manager points out that they can no longer afford to buy grapes on their RTGS$4,500 salary? The bank will have no option but to increase salaries or risk a mass exodus of skilled staff as they seek opportunities outside the country. There is no way highly skilled professionals will accept a salary which is effectively less than US$1,000 when they could easily earn three times as much in South Africa.

If a middle level manager has their salary increased to RTGS$9,000 (US$2,500) after tax how much will a bank teller demand? Industry will soon have no option but to respond to market realities and pay a minimum living wage of at least RTGS$1,000 while government will continue to pay civil servants RTGS$300 on the a ridiculous argument that RTGS$300 is at par with US$300. The discontent will be impossible to contain.

Ncube is aware of the unsustainable nature of the monetary policy status quo. He also knows what needs to be done. At Chatham House in London, Ncube openly said the market had clearly illustrated that RTGS dollars and Bond Notes are not at par in value with the US dollar and he was unwilling to fight the market. He went further and said government would eventually allow for the exchange rate to be floated.

However, this is not what Mthuli has done. Instead, government has introduced Stalinist measures to imprison foreign currency dealers for ten years through the unconstitutional Mugabe-era Presidential Powers (Temporary) Measures Act which is being used to allow President Mnangagwa to undermine the Republic by creating laws by decree as though he was a monarch . 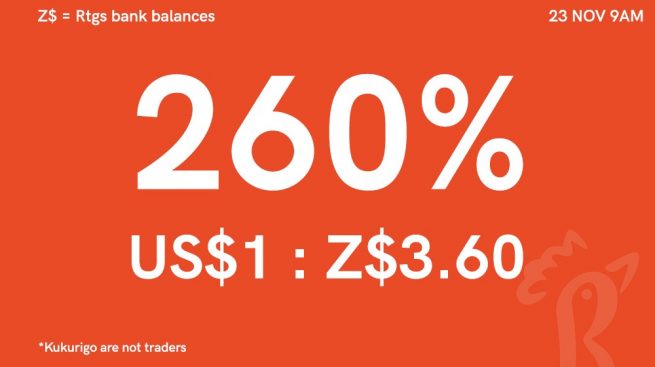