The government has released the schedule for the payment of bonus for the civil servants. The Secretary to the Treasury George Guvamatanga announced that members of the army, air force health, police and prisons will get they 13th cheque on the 28th of November while those in education will get on 29 November with the rest of civil service getting on 30 November.

Finance and Economic Development Minister Professor Mthuli Ncube in his budget presentation last week said this year’s bonus will be calculated basing on basic salaries only, unlike in the past where allowances were included.

“Traditionally, payment of the 13th cheque is computed based on basic salary, housing and transport allowances. For 2017, the budget incurred expenditure of US$174,6 million. However, as we embark on austerity measures focusing on enhancing the health of our public finances, the budget proposes a 13th cheque that is computed based on basic salary only (excluding housing and transport allowances). This proposal will yield financial savings of around US$75 million per annum,”said Prof Ncube. 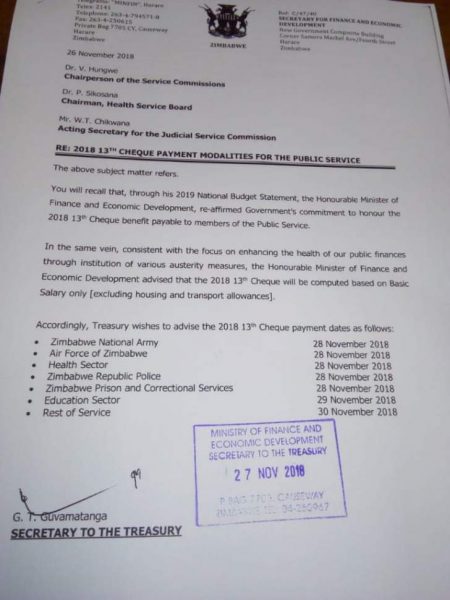