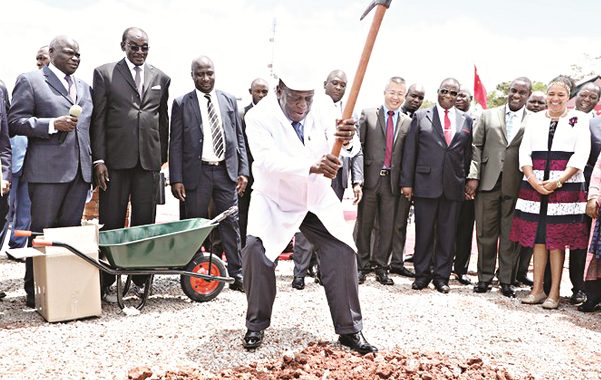 President Emmerson Mnangagwa yesterday officially launched the construction of the new 650-seater Parliament Building in Mt Hampden, nearly 20 kilometres outside Harare, that is expected to be completed by mid-2021 at the latest.

The building is being constructed by the Shanghai Construction Group using a grant of approximately $98 million (RMB 676.43 million) extended to Zimbabwe by the Chinese government.

The construction of the new Parliament Building is expected to solve the space challenges being experienced at the current building that has become too small for the 350 legislators.

The new Parliament Building is part of Government’s wider plans to establish a new city in Mt Hampden, where all three arms of the State will be housed.

In his address before he broke the ground and laid the foundation stone, President Mnangagwa said the new Parliament would enhance the country’s democracy.

“This infrastructure will enable parliamentarians to fully execute their legislative roles and further entrench democratic tenets in all facets of our society,” President Mnangagwa said.

He said Parliamentarians had a critical role to play for the attainment of the country’s Vision 2030 that called for hard work and dedication to duty.

“I urge all Parliamentarians to understand that they have a critical role to play as they enact and pass laws that will propel the attainment of our national vision 2030,” said President Mnangagwa.

“As such, hard work, diligence and commitment to duty must be a trait that is embedded in all Parliamentarians. In the Second Republic, non-attendance of meetings and dereliction of Parliamentary duty should not be tolerated.”

President Mnangagwa said the law was an instrument of development that should facilitate and promote development and urged legislators to demand urgency in the pace of various legislative reforms that were being implemented.

“In addition, MPs must be accountable to the people both individually and collectively, as they have the onerous burden to truly represent the people that elected them into office,” he said.

“I call upon all citizens to account for all MPs with regards to their activities in Parliament and legislative agenda.”

President Mnangagwa said the relocation of Parliament would be a catalyst for other developments.

“The relocation of Parliament to Mt Hampden will be a catalyst for subsequent developments throughout this area,” he said. “All three arms of the State will relocate here.

“We shall also develop other Government buildings, banking halls, shopping malls, residential areas and recreation facilities which will culminate in the emergence of a new city.”

President Mnangagwa thanked the Chinese Government for providing the grant for the construction of the new Parliament building.

“This long awaited construction of the new Parliament will be undertaken by Shanghai Construction Group and is funded by the Government of the People’s Republic of China to the tune off RMB 676,43 million,” he said.

“We express our profound gratitude to the Chinese government for their continued support of our various development programmes. We commend the Belt and Road Initiative under which infrastructure development projects such as this one are being undertaken in emerging markets.”

China has provided funding for various infrastructure programmes in the country, including the ongoing expansion of the Hwange Thermal Power Station and the expansion and modernisation of the Robert Gabriel Mugabe International Airport that will commence soon.

Early this year, President Mnangagwa commissioned and switched on the $533 million Kariba South Power Station Extension Project undertaken by China’s Sino Hydro, which added another 300 megawatts to the national grid.