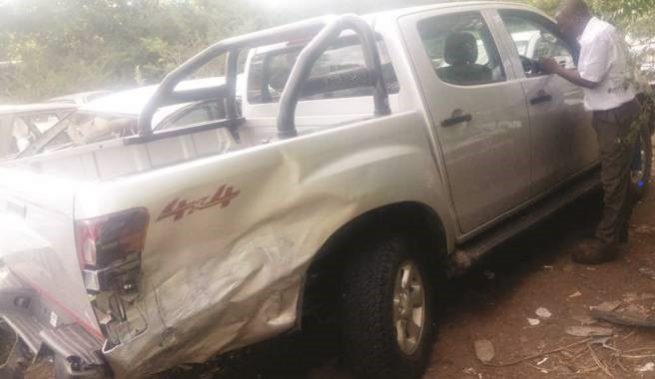 CHIEF Gampu’s 25-year-old son allegedly crashed his official vehicle during a joyride and lied that it had been stolen.

The unregistered Government official double cab Isuzu worth $50 000 had been reported stolen on Wednesday.

The Chief’s son, Mr Onasisi Sithole, had informed the traditional leader that his Isuzu KB Silver Grey Double Cab had been stolen at Nketa 6 Garage in Bulawayo.

Chief Gampu had left Mr Sithole in a fuel queue at about 8PM.

After refuelling the car at about 11PM, Mr Sithole had claimed that the car had been stolen after he had left the engine running, with keys in the ignition as he entered a shop to buy something to eat.

He also confirmed that Mr Sithole had lied that the car had been stolen.

“We have talked to the police who have told us that the Chief Gampu’s car has been recovered. In fact the young man (his son) had panicked after he was involved in an accident and claimed that the car had been stolen. His father had left him in a fuel queue and considering that he refuelled late at night, he decided to drive to town so that he could buy something to eat,” Mr Bhebhe said.

“He was involved in an accident in the city centre before he could buy the meal. In a state of panic not knowing how to deal with the situation, he made up that story that the car had been stolen.”

Mr Bhebhe said the car was found near Unity Village along Joshua Mqabuko Street between 5th and 6th Avenue.

He said the family was still in talks on how the case would be treated. A source said police interrogated Mr Sithole who revealed the truth after his car theft story did not add up.