Deputy Minister of Information and Media and Broadcasting Services Energy, Energy Mutodi has revealed that President Emmerson Mnangagwa will not elbow opposition leader Nelson Chamisa from the presidential race come 2023.

Mutodi dismissed the claims that Mnangagwa’s administration will increase the presidential age limit to 52, a development which automatically disqualifies Chamisa from the presidential race.

War veterans leader, Victor Matemadanda is on record saying because his party had the two thirds majority in parliament, the minimum age for one to contest for presidency would be raised to 52.

However, Mutodi said Mnangagwa’s actions and policies will do his bidding for presidency in the 2023 plebiscite.

“Let me make it clear that His Excellency President ED Mnangagwa will not seek to outdo his rival in the last election Nelson Chamisa by increasing the age limit for Presidential candidates. Instead, his policies and actions will do the bidding for his next term.” 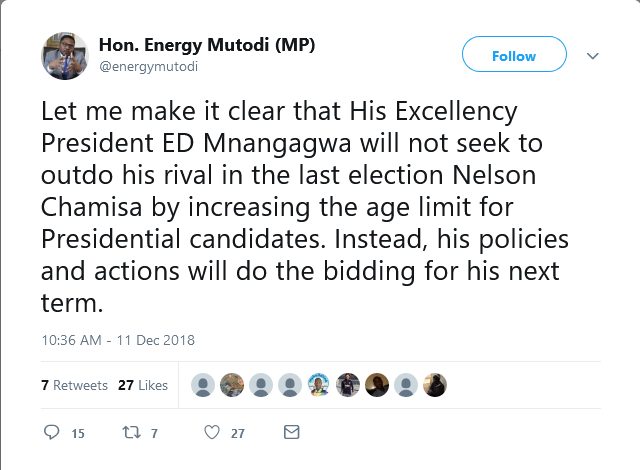