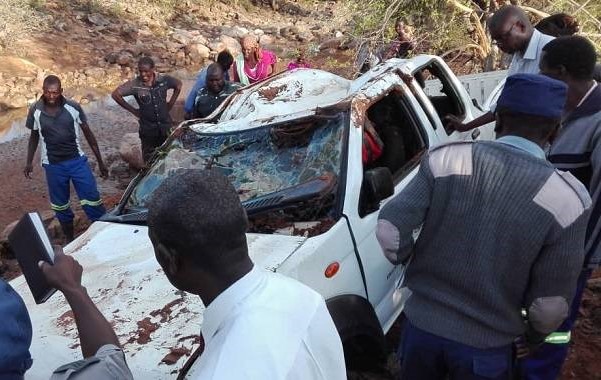 THE body of a Ministry of Primary and Secondary Education official from Matabeleland South Province whose vehicle was swept away by a flooded river while travelling with a colleague who remains unaccounted for has been found.

The vehicle was swept away on Monday evening at Mamsisi River bridge in Ntalale Ward, Gwanda South.

The two Government employees were on their way from Ntalale where they had gone on duty when the incident occurred.

Their vehicle was found by villagers on Tuesday morning along Mamsisi River about 200 metres from the bridge lying on its roof.

A search for the two colleagues on Tuesday by villagers yielded nothing.

A sub aqua team was yesterday deployed to search for Ms Samukeliso Dlamini who is the Gwanda District Schools Inspector and Mr Richard Nyandoro, an accountant, who had been missing since the incident.

Matabeleland South Provincial Education Director, Mr Lifias Moyo who spent the whole day at the scene confirmed that a body was recovered at around 5PM.

He said he could, however, not divulge the name.

Mr Moyo, however, said Dlamini was driving the vehicle when the accident occurred.

Ntalale Ward councillor who was also at the scene, Mr Coster Ndlovu said Ms Dlamini’s body had been recovered.

“The sub aqua team recovered the woman’s body from the dam who has been identified as Ms Dlamini around 5PM. Only one body has been recovered today as the sub aqua team has aborted the search for the day and they are set to resume tomorrow, “he said.