Self-styled communications strategist William Mutumanje’s (Acie Lumumba) claims that suspended RBZ bosses Mirirai Chiremba, Norman Mataruka, Gresham Muradzikwa and Azvinandawa Saburi – were part of a cartel controlling the allocation of foreign currency and bond notes to traders on the black market has been rubbished by the Central bank as false information.

In a letter to the public dated 10 December Governor John Panonetsa Mangudya said, “Members of the public will recall that RBZ suspended for an indefinite period four of its staff members Messrs Mirirai Chiremba, Norman Mataruka, Gresham Muradzikwa and Azvinandawa Saburi to pave way for investigations following some public utterances by Mr. William Gerald Mutumanje that the four were involved in corrupt activities and illicit financial dealings.

“The Bank and law enforcement agents carried out investigations which on conclusion have revealed that Messrs Mirirai Chiremba, Norman Mataruka, Gresham Muradzikwa and Azvinandawa Saburi were not involved in the corrupt activities or any impropriety as alleged by Mr Mutumanje. The Bank would thus like to advise the public that the quartet has been accordingly absolved of any wrong doing.”

Mutumanje had claimed that the four directors together with senior Zanu PF officials with political clout were behind the cartel’s survival, adding that the officials were linked to “remnants” of former Central Intelligence Organisation director-general Happyton Bonyongwe, his wife Willia, who is the former Zimra board chairperson and an unnamed top executive at the National Oil Company of Zimbabwe.

Mutumanje later confessed in a leaked whatsapp audio recording that he was working for embattled War Veterans leader Chris Mutsvangwa who had bought him with $40 000 to lie. 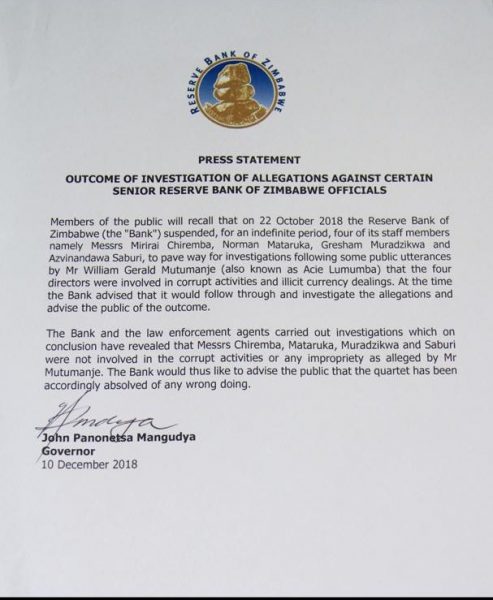