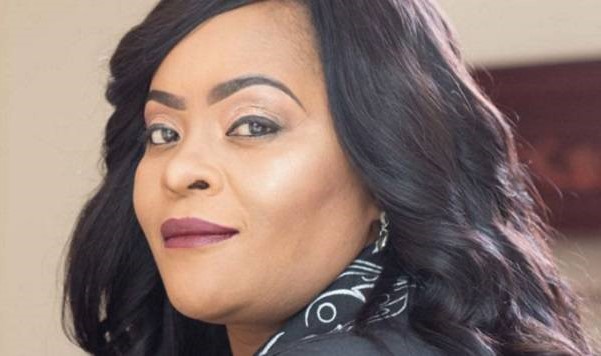 The post by Elikem was likely a reaction to shade that was being thrown at his new full-figured lover – South Africa-based Zimbabwean Edith Chibhamu by controversial transgender, Tatelicious Karigambe.

Moments before Elikem unveiled his bae, Tatelicious – a man who made headlines locally after splashing over US$80 000 to transform herself into a woman, had posted images of the lovers all cozy.

She dissed Elikem saying Pokello had upgraded with her new partner while he had downgraded.

As Tatelicious’ followers were still commenting on the pictures, she started insulting Chibhamu accusing her of being a human trafficker and a regular visitor to traditional healers.

She went on to claim that Chibhamu, a friend of Olinda’s, was married to one Gift Tsamba and posted a picture of her with him.

All this mud-slinging by Tatelicious was apparently because she had discovered that Chibhamu, a businesswoman whose interests are in infrastructural and property development as well as mining and agriculture who had promised to sponsor her “meet the people tour” in South Africa next year, was taking her for a ride.

“Edith Chibhamu, wakandikwidza ndege yemashanga (you gave me false hope) lying to me that you’ll support my album launch financially and sponsor my South African tour. Your personal assistant Theresa had to call me to inform me that you were actually doing nothing for my tour,” ranted Tatelicious on her Facebook fan page.

“I always had my doubts, but the truth came out.”

Tatelicious further claimed: “Edith Chibhamu wanted me to start Human Trafficking with her Arabic partners in Dubai but I developed cold feet. Maybe that’s why she boycotted sponsoring my SA tour.”

Elikem, who had been teasing fans with posts of his new lover, is currently in Dubai on business with his partner.

Tatelicious also posted an image of Chibhamu with SA-based local musician Nox and claimed that the two had a short fling. She claimed Nox’s small manhood caused Chibhamu to leave him prematurely.

All these claims by Tatelicious’ received mixed feelings from followers. Most suggested that she solves her differences with Chibhamu in private.

However, Tatelicious’ Facebook following continues to grow because of her late night live videos and posts where she gossips about several Zimbabwean socialites and celebrities.

After the controversial Internet sensation let the cat out of the bag yesterday, Elikem posted an image of him and Chibhamu on his Instagram wall. On his caption, he said he had gotten to a stage where one’s appearance did not matter.

“Good people can really have a great impact in your life. Give me a deep conversation or a passionate debate over brainless beauty anyday. Someone who makes me reconsider my long-held beliefs and challenges my mind.

“Being a Sapoisexual brought me here. You get to a stage where looks, size and age don’t matter anymore. You’d rather have God, peace and love.”

Responding to Elikem’s post, most of his fans said his happiness is what is important and wished him well with his new lover.

Those on Tatelicious’ platform were, however, mocking him saying he had downgraded from Pokello.

“Pokello is finer though, but what matters is your happiness. All the best and God bless your relationship,” commented one Chinenyenwigwe.

Also in reaction to Tatelicious’ claims was Tsamba who admitted that he was Chibhamu’s husband, but said the two had since gone their separate ways.

“Edith Chibhamu was my wife, yes. We aren’t together anymore and she’s free to do what she wants.

“All I know is she’s a wonderful woman with a pure heart of gold”.

Tsamba said it was a pity that people were out to tarnish his ex’s image.

“It’s only God who can punish people seeking to destroy her for selfish reasons. She’s the mother of my children and I’ll forever cherish her. Anyone who wins her heart will be a lucky man as she’s a wonderful, God-fearing woman,” he said.