President Emmerson Mnangagwa will soon effect a cabinet reshuffle that will see a number of ministers losing their posts, a senior government official has revealed.

“After all what has happened, it’s now clear that some ministries are being messed up and President Mnangagwa has to take action. A reshuffle is coming and those messing up your days are numbered.” 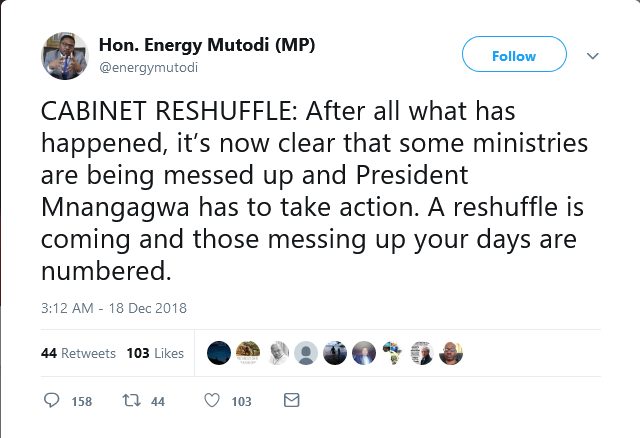 On Monday we reported that there are plans to retire Minister of Foreign Affairs Sibusiso Busi Moyo from government position to replace Obert Mpofu who is retiring from active politics.

Another change which sources in the Office of the President cited was that Minister Monica Mutsvangwa might be redeployed to the Ministry of Foreign Affairs and Mutodi elevated as substantive Minister of Information.

Drama as h0rny woman attempts suicide after being denied se_x by her husband for...

News Muza Mpofu - 7 August 2021 0
A CHIKANGA woman contemplated taking her own life after being denied c0njugal rights by her husband for over a year. This emerged at a Mutare...

2 married lovebirds killed in accident while enjoying quality time in back seat of...

News Muza Mpofu - 7 August 2021 0
TWO married lovebirds were allegedly enjoying quality time at the back seat of the car they were travelling in before its involvement in a...

News Muza Mpofu - 7 August 2021 0
A Manicaland man, who appeared in court yesterday, was remanded in custody for striking his neighbour three times with a machete, accusing her of...

News Muza Mpofu - 7 August 2021 0
VILLAGERS of Kandeya in Mount Darwin were on Monday shocked after an 82-year-old man was fatally struck with an axe handle by his 27-year-old...

News Edmore Huni - 7 August 2021 0
PRESIDENT Emmerson Mnangagwa has rewarded his wife Auxillia with a national award he just created. The award, Order of the Star of Zimbabwe Gold, was...

News Tshuma Rueben - 7 August 2021 0
The new Commander of the Zimbabwe National Army is Lieutenant General David Sigauke with President Mnangagwa promoting him from major general and appointing him...

News Muza Mpofu - 6 August 2021 0
A 16-YEAR-OLD Matobo girl has been arrested for infanticide after killing her new born baby. The girl gave birth, killed the baby and hid the...
Loading...