The MDC notes the release into the public domain the report of the Commission of Inquiry (COI) into the Violence of 1 August 2018, which report has confirmed what we all knew that the military shot innocent Zimbabweans on that fateful day.

With respect it was just a public relations show for Zanu PF, we reject the report in its entirety but sadly for Zimbabwe we are back to square zero. 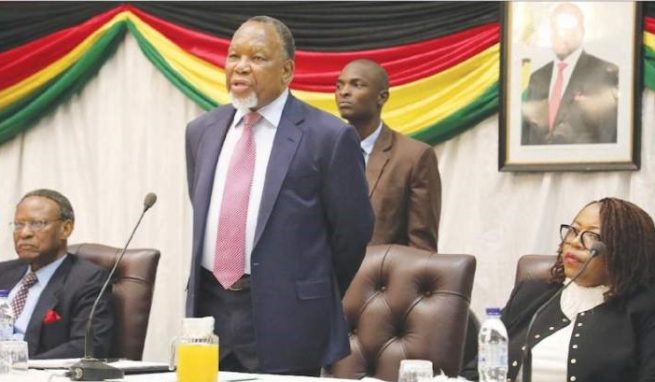 The MDC is a peaceful organization which must be applauded for resisting unconstitutional means of redress despite years of suffering. Any attempt to blame the victims in the report is a clear ploy of equalization.

As we have always predicted, the outcomes of the commission are clearly bound on whitewashing the killing of unarmed innocent civilians by soldiers and create a climate of impunity for such killings while equating the victim with the perpetrator.

The Commission was compromised so it could not therefore finger those whole stole power. Justice has not been done, victims are turning in their graves, families have been insulted and millions of tax payers’ money have been wasted.

In the preamble of the report, the Commission recognizes that what was at stake was the direction that Zimbabwe is supposed to take. It was therefore incumbent upon the commission to outline a pathway that would take Zimbabwe out of a culture of violence which clearly dominates the national political space.

The commission also had an opportunity to contribute to Nation Building, laying a foundation for transitional justice and setting the tone for National Healing.

More importantly the commission had an opportunity to deal with the issue of militarization of the Zimbabwean State as well as setting a foundation for electoral sustainability as a pathway to constitutional democracy in Zimbabwe.

Sadly, the recommendations and the findings of the commission fall short of addressing the above as a result blowing the opportunity to answer the national question once and for all.

The unarmed civilians were killed to entrench Zanu PF in power immediately after a disputed election which we all know was won by MDC President Nelson Chamisa. We are therefore not deceived by the effort of President Mnangagwa to create a sense of urgency in releasing the report.

While the commission correctly locates the soldiers as responsible for the people’s deaths on the 1st of August, the report attempts to put blame on the MDC for organizing a demonstration and planning violence while also falsely claiming that the protestors were armed, something that cannot be confirmed using any of the available video footage including recordings of international media.

There is a shocking recommendation that the soldiers and the police are supposed to investigate themselves despite the fact that the military personnel who were interviewed by the Commission denied any wrong doing.

Is it is ironic that the Commission expects the people who have already exonerated themselves to lead their own investigation.

It is also ironic that when death occurs through the hand of an individual it is murder which according to our laws must be dealt with through the justice delivery system entailing a trial of the suspects at the High Court yet the commission recommends an internal investigation by the murderers.

We restate that the Terms of Reference were problematic in that they were judgmental and couched as a witch hunt in a way that could result in immunity for those who killed unarmed civilians in the full glare of the public; international community and; those who commanded them to do so.

A number of the Commissioners appointed had issues of potential bias and conflict of interest that our President Nelson Chamisa and his team adequately explained before the COI. They were compromised in a way that made these findings fairly predictable.

This is why the COI tries faint heartedly and suggests that campaign speeches of the MDC heightened tensions and contributed to violence. The MDC supporters have been recipients of gratuitous violence from both Zanu PF and the state as these two institutions are unfortunately conflated.

The conflation of Zanu PF and the state in the history of Zimbabwe has resulted in the unfortunate systemic and serial killing of civilians seen as opposition from immediately after independence to now. The Gukurahundi experiences in the 80s; the targeting of white farmers and hundreds of thousands of farm workers in the early 2000s; Operation Murambatsvina (drive away the filth) in 2005 that left more than 1.5 million people homeless; post-election violence in 2008 with widespread and systematic extra-judicial killings are some of the examples of the result of this conflation of party and state.

This is why the Commission ends up finding that the election was free and fair despite all evidence to the contrary that had been presented to them specifically from credible election observer missions.

The deliberate failure or omission to implement the constitution is part of a process that Zanu PF uses to reduce our electoral process into a charade meant to use electoral democracy as an instrument to acquire state power and place it at the hands of a small cabal that has conflated security, executive and economic power to the detriment of Zimbabwe’s development.

In short the report has several contradictions, it waters down its own findings for the purposes of exonerating the ruling elite from doing.

And even worse the report was released by a subject of the investigation thereby bringing doubts on whether it wasn’t doctored. The accused in essence read his own judgement and expects the victims to be satisfied.