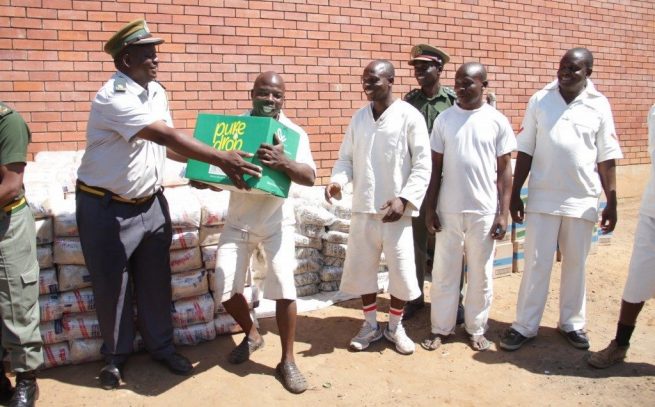 Investigations are underway following the disappearance of two tonnes of sugar and other food items from Harare Central Prison meant for the inmates last week.

This was revealed by the Zimbabwe Prisons and Correctional Services (ZPCS) Commissioner General Retired Major General Paradzai Zimondi during his acceptance speech of goods donated to Chikurubi Female Prison by Grace Faith Ministries in Harare today.

Retired Major General Zimondi raised grave concern over reports to the effect that prison officers are in the habit of stealing food meant for inmates.

“It has come to my attention that some of our officers are showing behaviour not expected from the force. Any prison officer found to have stolen food and donations meant for prisoners will face the full wrath of the law,” he said.

Bishop Charles Matondo of Grace Faith Ministries pledged to continue supporting the ZPSC to improve the lives of the underprivileged.

“It is the duty of every individual to help those who are underprivileged. Early next year, we are coming back again to see how best we can help,” he said.

The donation comprises mealie meal and sugar beans worth over $3500.

Zimbabwe has plunged into its worst economic crisis in a decade, fuel lines are snaking for hours, prices are spiking and residents goggle as the new government insists that the country — somehow — has risen to middle-income status.