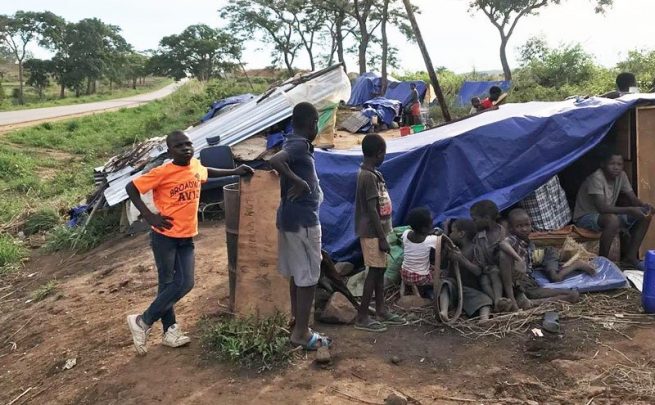 Anna Kwavakona held one of her one-year-old twin babies in her arms while her other children clutched to her dress as she stood in front of a tent shelter perched by the roadside on the outskirts of Bindura town along Mt Darwin highway.

Kuvakona was dressed shabbily and desperation was written all over her face.

Her clothes, apart from being a signature of time, were testimony of the distant relationship that has existed between the 24-year-old mother of four and water.

Annah Kuvakona with her children and colleagues

It was around 4pm and her face looked as if it was last scrubbed over a week ago and this is largely because of her family’s dire living conditions for the past three weeks.

Kuvakona’s face told a story of pain, neglect and dejection. She looked hungry and unable to bear the weight of her twin daughters, whose situation was as hopeless as hers.

“This one is called Kimberly and she has not been feeling well for some days. She has a running stomach and is very weak,” Kuvakona said, referring to the child in her arms.

“I think it is because of the water we are drinking, which is not safe. We fetch it from that well (pointing at a shallow and open well in a field just across the road). I am also having a challenge feeding them.”

The children looked underfed and scruffy — epitomising the hard realities that have confronted the family and 17 others since three weeks ago when they were thrown out of Claverhill North Farm, owned by Kingdom Community Church (KCC).

The families were dumped by the roadside by former Rushinga senator Damian Mumvuri (Zanu PF), who says he is the new owner of the property.

“I have four children and I have asked a friend to temporarily take care of the other two,” Kuvakona said.

“My husband is not here, he has gone out to look for food. We do not have anything to eat.

“Our food was thrown away when we were chucked out of the farm. It was a nasty experience.”

The distraught mother nearly broke into tears as she narrated the harrowing experience at the hands of the police when they were violently evicted from the farm they had called their home all their lives.

“We are now living in the open, and we are in the rainy season. We were only given these tents by the district administrator two days ago. Imagine being in the open with these young children.”

Another villager, Conwell Matope (49), who is a father of six, said most of the villagers had been staying at the church-owned farm before Mumvuri “invaded” the property in 2005, armed with an offer letter from the government.

The families have been fighting Mumvuri’s seizure of the farm in the courts. Matope is an elder at the KCC.

The villagers claim the church, which employed most of them, owned the property, that they claim is now being leased to a white commercial farmer by the former Senator.

“The white man has been operating at the farm for the past three years,” Matope said.

“We were evicted by Mumvuri three weeks ago and dumped here. We don’t have water and we are using bush toilets. It is a matter of time before there is an outbreak of diseases.

“We have been exposed to rains and thank God that the children here (pointing to a one-month-old baby and a four-month-old baby in her teenage sister’s arms) are still alive, but I am sure it is only a matter of time.”

Matope said they had tried to get assistance from Mashonaland Central Provincial Affairs minister Monica Mavhunga without any joy.

“She told us that there was nothing she could do if we are evicted from someone’s farm,” she said.

“We don’t have anywhere to go. We were born and grew up at this farm and we know no other home. (The minister) uses this road every day, but has done nothing to assist us.

“She should have found us another place to go to. It is painful, our ancestors’ graves are at the farm, and we cannot leave them just like that.

“But even if we are to go back to the farm today, there is no more shelter for us because they destroyed our houses.”

Simbarashe Chingoka, a member of the same church, weighed in, saying more families faced eviction from the farm.

“Only 18 families are here out of the 46 that were settled at the farm,” he said.

“Others are still there because Mumvuri ran out of money to throw them out.

“He said he was using the money he gets from leasing the farm to a white farmer to evict us.”

Chingoka added: “They used force and threw away our foodstuffs. We don’t have food right now. Our livestock was also left at the farm.”

Another victim, Estery Banda (45), whose husband is aged 61 and has worked for the church for the past 24 years, said she had been forced to abandone her aged mother at the farm.

“My mother was born in 1944. She is old and ailing and can’t walk anymore. She could not come with us because of her condition. We left her and asked a neighbour to look after her,” she said.

“For three weeks I have not seen her, I can’t go back there, it will mean trouble for me and my mother.

“We are here and our husbands are having to move around the surrounding communities to look for work in exchange for food.

“It is almost sunset and we have not eaten anything since morning as we are waiting for the men to come back so that we have something.”

She added: “We no longer have anything, even our property was destroyed by the rains.

“We only got these tents from the DA yesterday (Wednesday) and he promised to take our problem to higher offices.

“Even our MP (Kennedy Musanhi) has never been here, we don’t know if he is not aware of our predicament.

“We thought the land reform programme was for all of us, but we were wrong, it is for the powerful.

Children are living together with their parents by the roadside

“Mumvuri seized the farm from the church, which has been here for many years helping communities, and here we are now — living in the open.”
Mumvuri refused to comment on the matter, referring question to his lawyer Zvidzai Kajokoto.

Kajokoto said Mumvuri was allocated part of the farm by the government in 2006 and the disputes that arose after the allocation were settled by the courts.

He said the farm workers refused to work for the Zanu PF politician and they had initially promised to relocate before they changed their position.
“The issue started in 2016 and in November 2017, we had a consent order that they signed with their lawyer, Mr Gumbo,” he said.

“They signed the judgment, but they do not want to move now. They are the ones who actually proposed that they would move out in August this year.”

Farm workers were some of the biggest victims of Zimbabwe’s chaotic land reform programme that displaced over 4 000 white farmers and destroyed the country’s once thriving agriculture sector.

The workers, many of them of foreign origin, were left homeless after the new land owners evicted them.