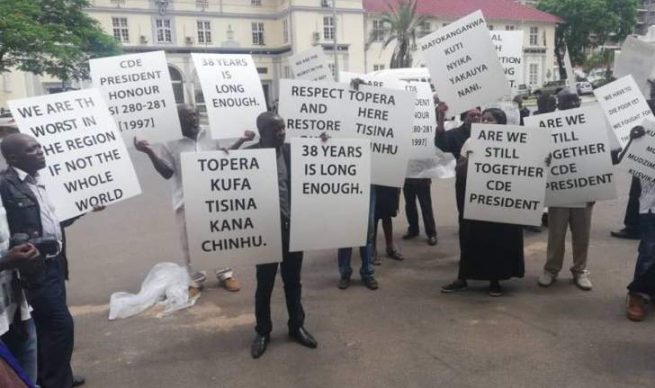 War veterans from across the country have disowned a group of members who demonstrated at Munhumutapa offices in Harare last week pressing to have their demands met.

Zimbabwe National Liberation War Veterans Association chairpersons from seven provinces and some national executive members met in Kadoma where they condemned a group of people that demonstrated purporting to be representing the interests of the freedom fighters.

The chairpersons said the demonstrators are not part of the rank and file of the war veteran structures.

“Bonafide freedom fighters understand protocol and in the case of last week’s incident, the manner in which the demonstration was staged shows those behind the action have no clear understanding of the ethos and values of the liberation struggle,” said Cde Sonny Mguni Chairman for Matabeleland North Province.

The Kadoma meeting also discussed the issue of former ZIPRA properties, which they hope to retain.

The properties are said to be under judicial management.