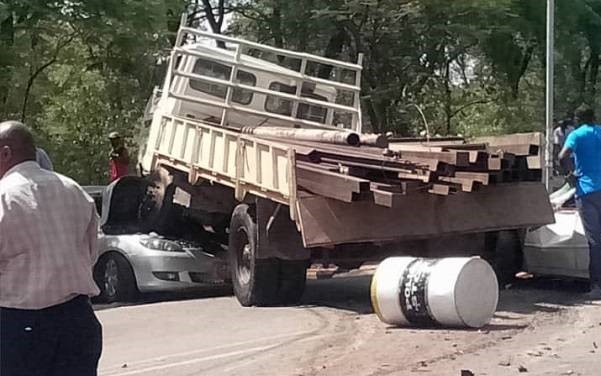 SEVEN people including a traffic police officer were injured while six vehicles were extensively damaged after a truck driver rammed into vehicles at a roadblock near Kwekwe along Bulawayo-Harare Highway.

The truck whose brakes failed as it approached the roadblock, collided head-on with an oncoming vehicle and then crashed into vehicles that had been stopped by police at the roadblock.

Witnesses said the truck ploughed into vehicles that were being attended to by police officers at the roadblock resulting in a pile up.

“On December 21 at around 2:35PM, Luckmore Mbofana was driving a 7- tonne truck along the Harare –Bulawayo highway towards Kwekwe.

“Upon approaching the 216 kilometre peg where there was a police roadblock, Mbofana whose truck was carrying steel bars, failed to stop the vehicle after its brakes failed,” said supt Mushawembiri.

He said Mbofana’s truck collided head-on with an oncoming vehicle before ramming into other vehicles that had been stopped by police at the roadblock.

There was a pile up which resulted in people being injured and vehicles damaged.

“Constable Tonderai Dapira who was manning the roadblock was hit by drums and he sustained injuries on his left leg and bruises all over the body. He is admitted to Kwekwe Hospital where he is said to be in a stable condition,” said Supt Mushawembiri.

The other six are said to have been treated and discharged at the same hospital on the same day.

Supt Mushawembiri said Vehicle Inspection Department (VID) officers were still carrying out investigations and further information would be released in due course.

Meanwhile, in Mbizo, a woman who was waiting to board commuter omnibus died upon admission to Kwekwe Hospital after she was hit by a vehicle that veered off the road.

Police confirmed the death of Ms Theodora Mushoriwa after being hit by a vehicle as she waited for transport to work.

She has since been buried at Msasa Park Cemetery.