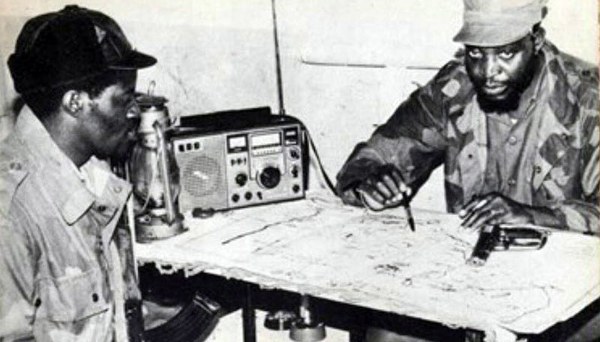 Defence minister Oppah Muchinguri-Kashiri has made sensational claims that she was stopped dead in her tracks by former president Robert Mugabe over an explosive book that she had written regarding the disputed circumstances surrounding the death of liberation icon Josiah Magama Tongogara.

Muchinguri-Kashiri’s eyebrow-raising claims come as Tongogara’s widow, Angeline, has also suggested that her husband may have been murdered by his rivals in the ruling Zanu PF — whose leaders allegedly also stopped her at the time from properly viewing her husband’s body.

Speaking in Harare on Wednesday, at commemorations to mark Tongogara’s death, a visibly-emotional Muchinguri-Kashiri threw the cat among the pigeons in Zanu PF with her shocking claims that Mugabe had ordered her to hand over for good a book which she had written on the decorated war hero’s death.

“I once wrote a book about this story but I did not know I was not allowed to write about it … but the people who were involved are now dead and so I might as well reveal the truth.

“I had written a book and story about the accident and I was summoned by the former president who was in the company of generals (Solomon) Mujuru, (Vitalis) Zvinavashe and (Josiah) Tungamirai (all now late) who were dressed in military uniforms.

“You can see how intimidating it was … I was told to surrender the book,” Muchinguri-Kashiri told her stunned audience at the commemorations.

The Defence minister, who was travelling with Tongogara in the same car on the fateful day that he died, also revealed that Mugabe had — prior to the feted general’s death — unsuccessfully tried to persuade him and his aides to fly to their destination.

“We actually had the air tickets and were supposed to be picked up in Beira, but Comrade Tongo said ‘no’, she (Muchinguri-Kashiri) should travel with me because I have documents that I want her to pack for me.

“The three of us were given limited time to go and freshen up before we went back. Can you imagine two days on the road and you are told to return with the same driver?” she narrated.

“He (Tongogara) insisted that no one but his driver would drive him. We left in the morning continuing with our journey. That is when we saw a big lorry with a trailer. All I remember is that the lorry was in the middle of the road.

“When our driver wanted to overtake that lorry, the trailer then blocked our way at the moment when the driver had accelerated in order to pass.

“There were a lot of people on the roadside. I did not know that … Tongogara had passed on.

“People like the late Kumbirai Kangai would come and say he was alright, I only knew about his death after about a month,” Muchinguri-Kashiri said.

Although it’s nearly 40 years since Tongogara died, his death continues to be a hot topic among former freedom fighters — amid a myriad conspiracies about what happened and who may have “planned” his death.

Former Home Affairs minister and respected war veteran, Dumiso Dabengwa, is among those who have previously made stunning open claims that Tongogara was killed by his colleagues in Zanu — ostensibly for supporting a bid to have the late Vice President Joshua Nkomo to lead a single party in the watershed 1980 elections.

This was not to be as Mugabe apparently insisted on leading the political vehicle in place then, the Patriotic Front (PF) — which would have been made up of people drawn from both Zanu and Zapu.

“He (Tongogara) had almost openly said it during the Lancaster House discussions that as far as he was concerned, Nkomo should be the leader of the PF because Nkomo is a natural leader who has got the experience and who has got the focus, whereas as far as he was concerned Mugabe was good only for administration and that that’s the position he should occupy, probably as secretary-general of the PF.

“Those were Tongo’s views and unfortunately he said them out during informal discussions with other people at Lancaster House. But he was direct, he said it to me. And he was very clear,” Dabengwa told journalists in Bulawayo this year.

In 2012, Tongogara’s widow Angeline also suggested that her husband had been killed by his colleagues, claiming further that there had been a concerted endeavour to block her from viewing his body upon his death.

The still aggrieved Angeline also alleged that she had been barred from visiting the accident scene and had subsequently been “drugged” at the morgue when she tried to view Tongogara’s body.

“I was never taken to the accident scene up to this day. They said no one was allowed to go there because Samora (Machel, the late Mozambican president) had given orders that no one should ever drive again.

“At the hospital, I didn’t see much. When I went to the mortuary, I was told that there were some undertakers who had been hired from home to embalm his body.

“So when I got to the mortuary, I removed the cloth starting from the head and I saw the wounds, but as I was about to pull away the whole cloth so that I could see the whole body, Josiah Tungamirai came and said why are you letting her touch this body.

“I was later taken to my house. I still don’t know what that injection was meant to do. No one explained anything to me,” she added.