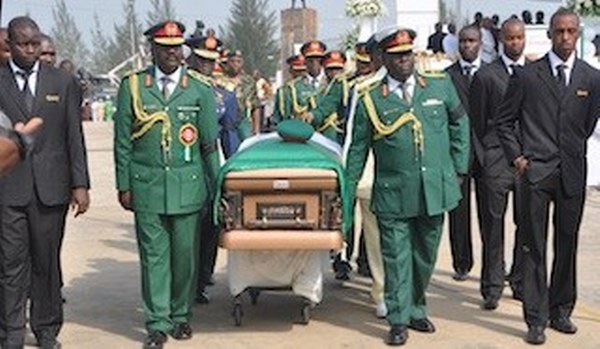 Shehu Shagari, Nigeria’s second president, whose civilian tenure was sandwiched between two military rulers in an era rocked by coups, has died. He was 93.

Nigeria’s current President Muhammadu Buhari, who unseated Shagari 35 years ago, said on Saturday he mourns “the departure of a patriot, who served Nigeria with humility, integrity and diligence.” Shagari’s grandson Bello in a Twitter post said he died on Friday in the capital, Abuja, after a brief illness.

Shagari had an ambivalent relationship with the military, which initially favoured his ascension to power but held him in solitary confinement for three years after toppling his government.

After military ruler Olusegun Obasanjo lifted the ban on political activity in Africa’s most populous nation in 1978, Shagari beat regional political veterans in a hotly contested election the next year. The polls followed 13 years of military rule by four different men.

At his swearing-in ceremony, Shagari said the military had “succeeded in large measure in unifying us.”

It had been less than 20 years since the West African powerhouse had earned its independence from British rule, and it struggled to forge national unity within the colonial borders which tied some 250 ethnic groups together.

Those years saw a civil war, a toppled civilian government and a series of military administrations including that of Gen. Yakubu “Jack” Gowon, in which Shagari served as a civilian finance minister.

Shagari is said to have been the first boy to go to school in his northern village of Shagari in the northeastern state of Sokoto. He started out as a science teacher before entering politics. From 1954-1966 he was a member of the House of Representatives and later held a variety of ministerial posts under both civilian and military governments.

Even though the military had voluntarily paved the way for democratic rule, the threat of its interference loomed over Shagari’s time in office.

The oil-rich nation’s economy suffered from a sharp drop in global crude oil prices, fueling discontent. On Dec. 29, 1983, Shagari announced austerity measures in a country already suffering from high unemployment rates and general disillusionment after the oil boom of the ’70s.

Shagari’s administration also was marred by corruption scandals. Even though the public considered him to be honest, his inability to rein in his government’s avarice was sharply criticised.

On New Year’s Eve in 1983, a group of military plotters toppled his government, describing Shagari’s administration as “inept and corrupt.” Buhari, then a military ruler, took over the nation.

Shagari, who had been re-elected a few months earlier, seemed to have seen it coming.

“My greatest concern is that democracy survives in Nigeria,” he told a biographer just before the coup.

It was not until Buhari returned to the presidency in 2015 that Nigeria saw the first peaceful transfer of power from one party to another. The next election is in February.

Meanwhile, The Sokoto State Governor, Aminu Tambuwal, has declared Monday, December 31, as public holiday in the state, to enable residents offer special prayer for the repose of the soul of former President, Shehu Shagari.

This was contained in a statement by Tambuwal’s Director General, Media and Public Affairs, Malam Abubakar Shekara, and issued to newsmen on Saturday in Sokoto.

The Governor said that the declaration followed consultation with the Sultanate Council.

“The state government therefore, requests Imams across Sokoto and the general public to dedicate the day for special prayers for the repose of the soul of the former President and for peace and progress of the nation at large.

“The government also directs all flags at public and private premises be flown at half mast in honor of the late former President, Shehu Shagari,” the statement read.