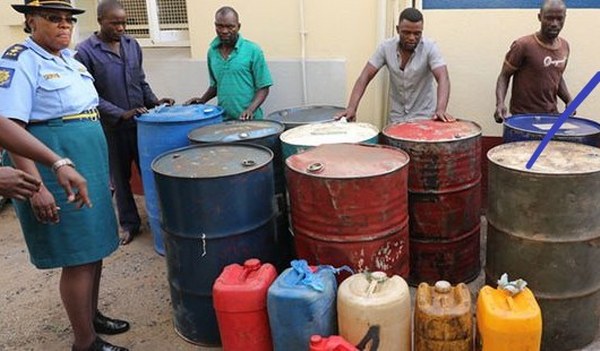 POLICE in Mutare have arrested five illegal fuel dealers and recovered 2 000 litres of both diesel and petrol that had been channelled to the black market in an operation that is also closing-in on service station managers who are allegedly conniving with the suspects.

The arrest of the suspects follows the execution of a successful operation in which police intelligence operatives disguised themselves as desperate motorists looking for fuel and hit the illegal dealers at various hideouts in the city.

Muchinjiko was arrested at Clan Garage which is situated at Number 24 Simon Mazorodze Road. He was found selling petrol for $4 per litre. Police recovered 100 litres of fuel which was stored in a room.

Sibale and Shungu were arrested along Riverside Road selling diesel at $2,60 per litre, while Charamba was nabbed at Nyika Garage situated along Glasgow Road with 800 litres of diesel and 20 litres of petrol. He was selling petrol at $3,40 per litre and diesel at $4 per litre.

Rakabopa was arrested at Fashu Garage. He had 400 litres of diesel which he was selling at $5 per litre.

During interrogations and interviews done with the suspects police discovered that the illegal fuel dealers were conniving with service station managers and fuel attendants to divert fuel to the black market.

Manicaland police spokesman Inspector Tavhiringwa Kakohwa said the long arm of the law will catch up with the culprits who are supplying the illegal dealers with the fuel.

He said the police is duty bound to protect innocent civilians from unscrupulous dealers who are cashing in on the fuel crisis.