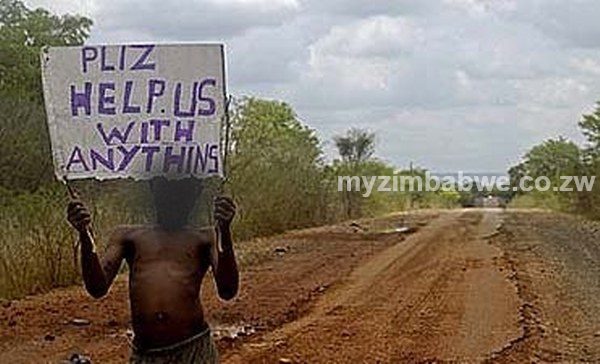 As the economy continues to deteriorate, rural areas are not being spared, with cash shortages and rising commodity prices hitting hamlets across the country.

Over five million people in Zimbabwe are said to be living in extreme poverty, with rural areas constituting to the larger percentage.

At least 72 percent of Zimbabweans are believed to be living in abject poverty, below the poverty datum line (PDL), and life in rural areas has been panned by the deteriorating economy.

While all Zimbabweans are reeling from economic hardships, the largest number of people living under the PDL is found in the rural areas.

The cash crunch has also intensified poverty, as many are forced to buy foreign currency on the black market to get essential services such as medication.

Most rural folk are now relying on government and non-governmental organisations for food handouts.

While many villagers rely on farming, a lot of farmers were disturbed last year due to late rains while others were forced to sell produce at give-away prices this year to survive to the next season.

And with the looming El Nino phenomenon, most of villagers interviewed by the Daily News on Sunday, said they faced a bleak 2019.

“People don’t have food; we have severe shortages and really government must help us.

“People are always at my door step asking for me to assist but I am also facing the same challenges, but I try to help where I can,” said Mkwena.

“Most people don’t have daily jobs so it is really a challenge to get food to eat.

“With the current situation it is difficult for us to farm efficiently since seed retailers are demanding US dollars,” said Chivasa.

Another Chihota ward 13 resident, Native Masimurimwa told the Daily News on Sunday that people are living from hand to mouth due to the prevailing economic conditions.

“What we farmed last year and sold, is no longer enough.

“We are trying to do anything to make ends meet and our children are struggling to stay in school.

“My wife and I sometimes have to go to the school and do odd jobs as debt payment so there is nothing good,” he said.

One resident from Murewa, Cecilia Chikomba of ward 10 said: “Children are failing to stay in school, while others cannot perform well as they go to school on little food or on empty stomachs.

“Prices have gone up and wages have not, and we were already earning little.”

“Life is hard for most of the villagers and even though they have been coming to me for assistance, crying that I do something, there is little that I have been able to do.

“Many people here farm but it hasn’t been enough with the price hikes and most customers will not buy your produce if they see that it is high, but the cost of living has risen.”

He added: “Worse of all we are now resorting to black market and some are even travelling to Mozambique for groceries because our shops don’t have anything and some things are now even cheaper across the border.”

The World Food Programme reported that a large number of Zimbabweans are food insecure.

This has remained the case especially in rural areas.

Many households in Zimbabwe will continue to live under poverty due to the snorkelling economy.

The vulnerable and disabled have also been affected by the prevailing economic hardships in rural.

A disabled girl that the Daily News on Sunday met in Chihota revealed that her parents were failing to provide money for medical attention and $15 for school fees as life is getting harder.