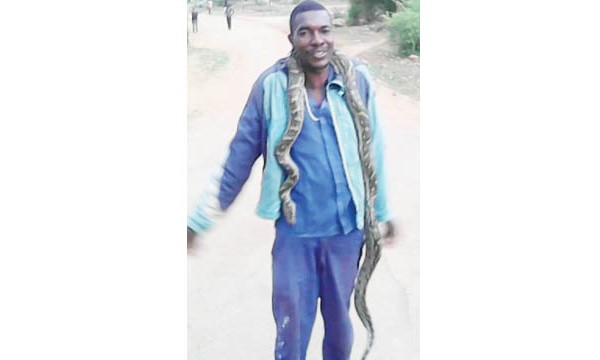 Police officers at Esigodini police station scurried for cover when a man brought his snake in a bid to dump it there.

A man from Habane Township left tongues wagging after a fruitless plea with the police to take the snake which was dangling from his neck.

B-Metro is in possession of a video in which the man tries several times to abandon the snake while the police who seem perplexed firmly order him to take back his snake.

It is reported that Felex has lived peacefully with his snake for several years.

B-Metro gathered that his troubles started after he failed to feed the snake.

A reliable source said: “Felex has always kept his snake as he believes it will bring him good luck in all endeavours he embarks on. Only recently the snake began to haunt him because it never seemed satisfied with the usual amount of food given to it.

“He came with the snake to our station and asked us to keep it for him. He said he no longer has food to feed it therefore it is troubling him,” said a police officer who spoke on condition of anonymity.

“We told him to take the snake to Zimbabwe Parks and Wildlife Management Authority (Zimparks),” said Ndebele.

However, Zimparks spokesperson Tinashe Farawo said they did not receive a snake from anyone recently.