REPRESENTATIVES of teachers’ unions across the board have made their positions known ahead of a crucial meeting today with government: schools will only open if the demand for salaries in US dollars is met.

Schools are opening tomorrow, and teachers are demanding a salary of $3,000 local currency, or equivalent in US dollars at the parallel market rate, among other demands.

They claim that the economic downturn has eroded their salaries so much that they are incapacitated to return to their workstations.

In a last-ditch effort to stem the crisis, government has called for a meeting today with representatives of the teachers’ unions.

The meeting takes place at a time striking doctors are also meeting to decide their next course of action after government failed to break their month-long industrial action.

This was after government made a few more concessions at the weekend, but representatives of the Zimbabwe Hospital Doctors Association refused to counter-sign the agreement before consulting their membership.

Teachers have threatened a crippling strike when schools open for the first term tomorrow, demanding to be paid in United States dollars or at least $3 000 local currency, among other demands.

Besides the Ministry of Labour, ministries of Finance, Primary and Secondary Education, Higher and Tertiary Education and the chairperson of the Public Service Commission will also attend the meeting.

Most teachers’ unions, however, yesterday said they would go ahead with the industrial action with the unions’ umbrella body, the Apex Council, saying the meeting would determine their next course of action.

Apex Council secretary-general David Dzatsunga said the civil servants’ umbrella body would consult its members on the next move after the meeting, adding that they would not stop individual unions from making independent decisions.

“We have agreed that every other action will be premised on today’s meeting with the five principals [ministers] from our employer,” Dzatsunga said.

“The decision to go for a strike comes from the members. Some unions can unilaterally declare a job action if that is what their membership has proposed. That will not necessarily be the position of the Apex Council. The apex body will sit down and make an apex position.”

He said the Apex Council has already advised government that their members may not be able to report for work because they were incapacitated due to the increased cost of living that has eroded their earnings.

The meeting would be first this year after the National Joint Negotiating Council met on December 7 last year, where Apex Council leaders walked out in protest after failing to get satisfactory answers from their employer.

Obert Masaraure, the Amalgamated Rural Teachers’ Union Association of Zimbabwe president said his union would send a representative to the meeting, but that would not stop preparations for tomorrow’s proposed strike.

“The strike will go ahead. Teachers will not attend the preparatory meetings today and will not report to work on Tuesday. The only thing that can stop us from going on strike is a reflection of US$ salaries in our accounts,” Masaraure said.

He accused government of exhibiting a contemptuous attitude when dealing with civil servants.

Zimbabwe Progressive Teachers’ Union president Takavafira Zhou also said the meeting would not stop the job action, but an increment of their salaries would do.

“Our salaries are enough to take us to work for two days. We are deliberating the two days we should report to work and the three we should stay at home. We are very clear about that. The purchasing power parity of our salaries can no longer allow us to do so. We cannot subsidise our employer,” Zhou said.

The largest teachers’ union, the Zimbabwe Teachers’ Association (Zimta), at the weekend announced that its members would start their strike action tomorrow, regardless of the outcome of today’s meeting. 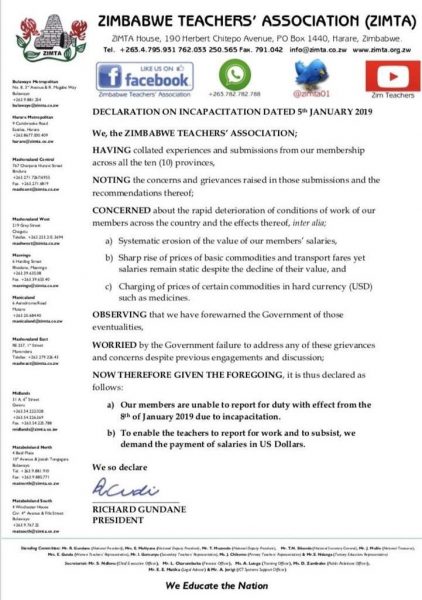 News Muza Mpofu - 1 June 2020 0
ADVOCATE Thabani Mpofu, the Harare lawyer who represents MDC Alliance leader Nelson Chamisa in most of his cases, has been arrested on charges of...

John Vashico who made headlines after claiming to be singer Tocky Vibes' dad feasts...

News Sekai Moyo - 1 June 2020 0
TWO Glendale men were reported to have eaten a stray baboon killed by the community on Friday. John Vashico and another one only identified as...

JUST IN: Covid-19 cases continue to rise in Zimbabwe

News Tanya Mugabe - 1 June 2020 0
Some MDC Alliance legislators who have hitherto been aligned to the party’s leader Nelson Chamisa are contemplating jumping ship and joining the MDC-T led...

SHOCKING: 'Senator Mudzuri took to his heels after snake nearly bit him at Tsvangirai's...

News Muza Mpofu - 1 June 2020 0
MDC-T senator Elias Mudzuri was nearly bitten by a snake during the burial of MDC founding leader Morgan Tsvangirai in 2018. This was revealed by...

Chaos as 'madman' knocks soldier down and grabs AK47 gun at Beitbridge border, one...

News Muza Mpofu - 1 June 2020 0
A Beitbridge-based female soldier was allegedly disarmed by a man, who is suspected to be suffering from mental illness while on duty at the...