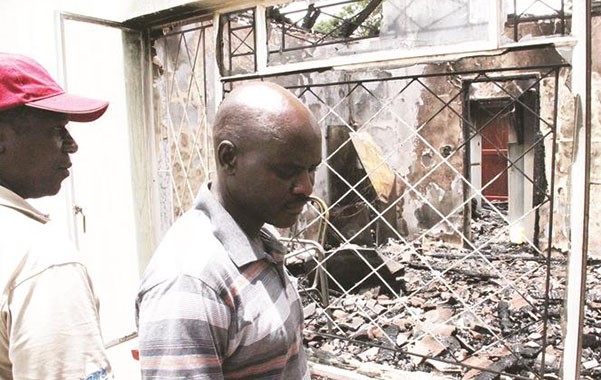 PROPERTY worth thousands of dollars was destroyed when fire gutted a cottage in the Sunridge neighbourhood of Mabelreign suburb in Harare yesterday. The fire is believed to have been caused by an electrical fault, although police are investigating the cause.

The Fire Brigade arrived at the house when the fire had already caused serious damage to the property.

“This fire may have been caused by an electrical fault,” said one of the neighbours.

“That is all I can say for now.” Another resident said they heard that an overheated laptop left to recharge on a bed could have caused the fire.

Neighbours tried to put out the fire, which started at 9am, but failed.

But their efforts appear to have saved the main house which was very close to the backyard cottage.

The owner of the house refused to entertain journalists.

“I do not want to talk to you guys from the media,” she said. “Just take the pictures you want and go.”

Beds, clothes and blankets were destroyed in the fire, which also disrupted electricity supplies to nearing properties.

News Muza Mpofu - 30 October 2020 0
HARARE deputy mayor Luckson Mukunguma was yesterday forced to abort a full council meeting he was chairing to escape through the window and run...

News Tanya Mugabe - 30 October 2020 0
LAW experts yesterday demanded the resignation of Chief Justice Luke Malaba over allegations of interfering with judges in the discharge of their duties, which...

Prophet Shepherd Bushiri and his wife are in South Africa illegally, face deportation to...