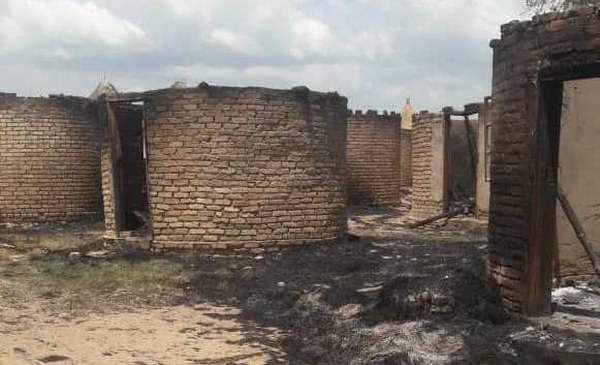 A man from Kezi set his neighbour’s bedroom hut and a kitchen on fire after he discovered that his wife was dishing out his sexual goodies to him.

It is said on 29 December 2018 Sihle Dube who is married to Mgcini Moyo left their matrimonial home under the pretext that she wanted to seek treatment from her grandfather Magwabulula, a well known traditional healer in Madwaleni area of Kezi.

A source close to matter said: “She told her husband that she is going there to seek treatment for her hand which was struck by lightning.”

The tell-it-all source said instead Dube headed straight to her secret lover Thabani Sibanda and intended to stay for two days but ended up extending her stay.

“She told me that she has been subjected to a hellish life by Moyo and that he was not sexually satisfying her. I had to stay with her for a week but I never knew that I’m courting tragedy for myself,” said the heart-broken Sibanda.

However, things got nasty for Sibanda as Moyo got wind that his wife was having a sweet time in between the sheets with Sibanda.

The source went on to say: “On 04 January this year at around 11:45pm Moyo went to Sibanda’s homestead and upon arrival he knocked at the door but there was no response. He then smashed windows. Sensing danger Sibanda escaped through the window in a boxer short leaving Dube at the mercy of Moyo who assaulted her several times with fists and booted feet.”

Dube managed to escape and sought refuge at her grandmother’s homestead.

While she was there she saw flames of fire.

“I saw the house on fire and later on a neighbour to Sibanda informed us that they failed to put out the fire and two rooms had been burnt down,” said the source.

When Sibanda went to check the degree of damage the furious Moyo chased him with a steel bar.

“I had to run for my dear life and reported the matter at Kezi police station,”said Sibanda.

Matabeleland South police spokesperson Chief Inspector Philisani Ndebele confirmed the incident: “We are investigating a case of malicious damage to property where a man set a bedroom hut and a kitchen ablaze leading to loss of property. An estimated value of $3 000 property was lost.”

He advised members of the public to engage third parties like pastors or elders whenever they have problems at home.

News Sekai Moyo - 24 September 2020 0
Media personality Misred has been at the receiving end of some nasty abuse and body-shaming online, after a post in which she suggested that...

News Muza Mpofu - 24 September 2020 0
THE US government has called on President Emmerson Mnangagwa’s administration to uphold constitutional rights and end ongoing political repression and corruption in Zimbabwe. This emerged...

News Tshuma Rueben - 24 September 2020 0
THERE is renewed hope that the much-needed and much-talked about national dialogue could happen soon, after top clerics met with President Emmerson Mnangagwa and...

News Muza Mpofu - 24 September 2020 0
THE ruling Zanu-PF has threatened to crack the whip on party bigwigs interfering with processes of the impending party district coordinating committees (DCC) elections. This...