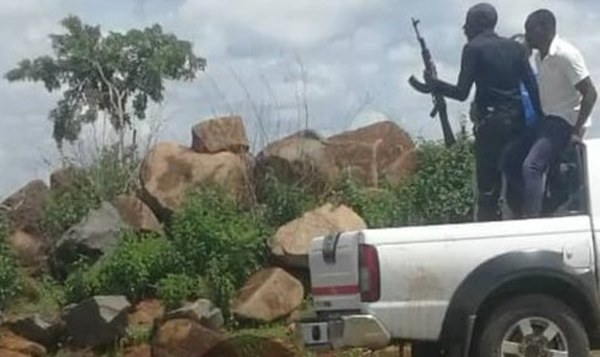 An armed person in civilian clothes, who government claims is a wanted “terrorist” after he was filmed discharging a firearm, was actually part of State security agents dispatched to crush protests in Harare suburbs.

Clad in a black combat with an AK-47 assault rifle, the man who many suspect to be a military officer, was filmed firing into the air along the Harare-Bulawayo Highway near Kuwadzana Extension and was moving in a Nissan NP300 registration ABV2127 together with other uniformed police officers.

At one point, he was pictured standing next to a police truck which was full of uniformed officers, brandishing his weapon. But on Tuesday, Information minister Monica Mutsvangwa described him as a terrorist wanted by authorities.

Yesterday, police spokesperson Senior Assistant Commissioner Charity Charamba said she could not comment on the matter until the photographs of the armed “civilian” in the company of police officers were shown to her.

“I am just a spokesperson and I need to engage the police officers on the ground to verify your claims. Can you bring the pictures here so that I could comment on them after consulting all stakeholders,” Charamba said.

The armed man was seen shooting into the air and at some point towards unarmed protesters who wanted government to address the on-going economic crisis bedevilling the country.