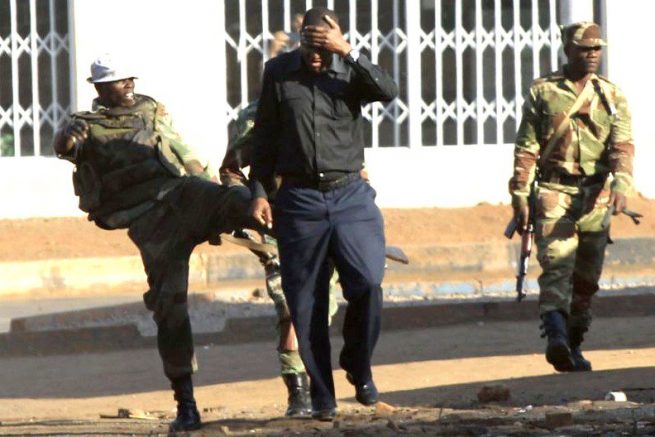 Presidential spokesperson Dr Nkululeko Sibanda has issues the statement below:

If there was anybody out there who had any doubt that Mnangagwa and General Chiwenga’s government was more than an impudent axis of evil, then the last 3 days provided unquestionable evidence.

What is absolutely clear is that the government has acted in the manner that fits hooligans and terrorists. This all started with the most bizarre announcement by any President anywhere on earth.

Almost immediately every right-thinking person understood that Zimbabwe was run by a group of lightweight thinkers, scaring everyone into shocked action.

Responding to the shocking incompetent manner in which Mnangagwa has run government, the people of Zimbabwe peacefully came out in numbers to protest and demand a government that can actually think and govern. Meanwhile, this government borrowed from the darkest pages in the history of modern governance. It flouted rules that cannot even be flouted inactive combat zones. Mnangagwa’s government ordered the Presidential Guard out of their uniforms, provided them with civilian cars and state of the art, high-powered automatic battle guns, to run riot on unarmed citizens.

Once again, these military men fired live ammunition at unarmed civilians killing several. The over the last 2 days he ordered an internet and communications blockade, during which the numbers of those killed and maimed may have increased. Pictures of the overnight military raids on residential areas are reminiscent of those carried out during Zimbabwe’s Gukurahundi genocide of the 80s, in Matabeleland. This only goes to prove that those who masterminded Gukurahundi and all the history of violence and disappearance of journalist such as Itai Dzamara, are at the helm of the State. The current abuse of human rights must come to an end immediately. Thus, the Presidency of the MDC calls upon the international community, in particular SADC, to intervene immediately to stop errant leaders from committing crimes against humanity, through military on unarmed civilians.

President Nelson Chamisa notes with concern the events of the last 3 days. The military has not just killed and maimed citizens in cold blood. They also burned down the MDC party headquarters, injured hundreds, arrested thousands and jammed the country’s communications networks. The primary targets of this blockade have been the journalist who have reported on conflicts and saved millions of lives across the globe over the last 2 centuries, including citizen journalists. Secondly, they have used this dark period to arrest, kill and maim hundreds without anybody reporting on incidences in real time.

President Chamisa continues to monitor the conditions in the country and stands in the front line with Zimbabweans as they continue exercising their rights to public and peaceful protests. At this juncture it is important to remind anybody who maybe misguided to act unlawfully and against the constitution by killing citizens that eventually the law always catches up. In terms of following the constitution no one is obliged to take orders from anybody that are unconstitutional and every individual is personally liable for crimes against humanity.

To the international community it is important to pay particular attention to the peculiar and characteristic ruthlessness of the Zimbabwe government’s methods of cruelty:

To the ZANU PF government and its President Emmerson Dambudzo Mnangagwa and his Vice General Chiwenga, President Chamisa strongly challenges you to open your hearts and turn away this evil. Think about the people you have killed over the last year and a half. Imagine their families and their anguish. You do not have to do this and it does not have to be this way. Zimbabwe can be a prosperous nation, prosperity brings about peace, not guns and murder. This appeal is to your humanity. Please take it seriously. Order the armed forces back into their barracks, allow peaceful protests and do not prevent a process on national dialogue. These are the first few steps you can take immediately.

Beyond the immediate President Chamisa thinks there is still enough room and need for national dialogue. As such, he still encourages you to consider this in light of his 5-point plan to restore Zimbabwe to a functional country.