The factional fights between President Emmerson and Vice President Constantino Chiwenga are far from being over with revelations that some ZANU PF Youth aligned to President Mnangagwa have been targets of beatings and arrest by the military and the police during the ongoing crackdown.

Posting on Twitter Former Deputy Finance Minister Terence Mukupe urged ZANU PF to be resolute and wait for President Mnangagwa to come back. 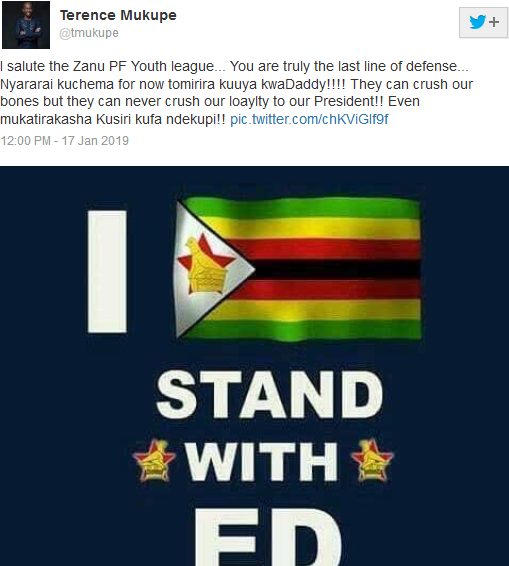 Mukupe further promised that ZANU PF will be taking a strategic move in the next 72 hours.

“I’m worried with what’s going on. The citizens are blind to what’s really going on.” Mukupe said. “The next 72hrs are going to be crucial regarding the path we are going to take as a nation. Chokwadi chichabuda President Mnangagwa is not the issue. 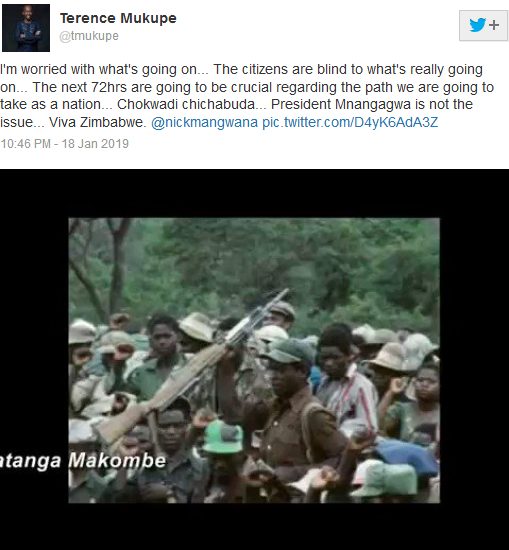 Commenting on the matter seasoned journalist Mduduzi Mathuthu said, “Terence Mukupe is essentially telling Zimbabweans that there is a military plot to get rid of Mnangagwa as President. He suggests Mnangagwa’s authority has been usurped, and that the military crackdown has not spared Mnangagwa loyalists in the townships.” 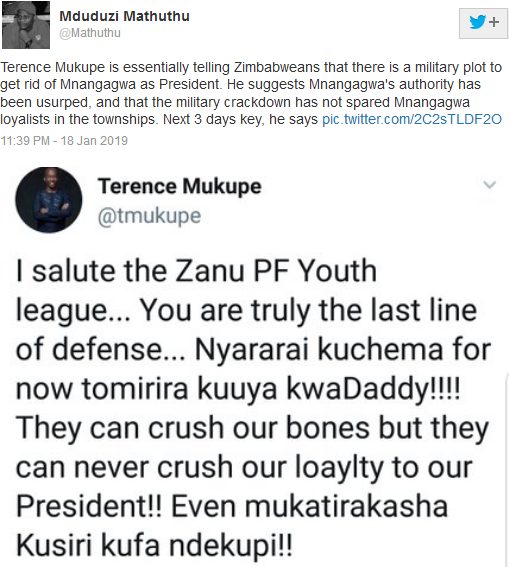 Vice President Chiwenga is alleged to be leading a faction of ZANU PF strongmen mostly who were loyal to President Robert Mugabe. He was seen at a prayer rally in Hwedza last year surrounded by dethroned ZANU PF leaders like Sydney Sekeramayi and David Parirenyatwa.

Videos & Pics Cynthia Goba - 8 August 2020 0
An anonymous ‘member’ of the 'Zimbabwe National Army’ has said it was high time the citizenry, including uniformed forces, stopped protecting corrupt politicians in...

So Sad: Evil woman bashes husband to death, her boyfriend sets the corpse on...

News Muza Mpofu - 8 August 2020 0
POLICE in Centenary, Mashonaland Central province, have arrested a woman who on Tuesday allegedly bashed her husband to death before conniving with her boyfriend...

News Tanya Mugabe - 8 August 2020 0
THE United Nations says it is following the Zimbabwean crisis with concern, urging Harare to respect human rights amid pressure for the matter to...

Drama as soldiers jump bar durawall and order beer lovers and their side chicks...

News Muza Mpofu - 8 August 2020 0
Local imbibers have always defied the lockdown. They connive with the local bar owner, lock themselves inside the bar, switch off the lights, drink and...

Covid-19 is real, it does not choose who you are: Ziyambi turns to God

Videos & Pics Muza Mpofu - 8 August 2020 0
The African Union has said that it is monitoring the Zimbabwean situation following reports of continued human rights violations by President Emmerson Mnangagwa's government. This...

News Muza Mpofu - 8 August 2020 0
ZANU PF members and activists are coming out in the open voicing their displeasure at the leadership of President Emmerson Mnangagwa. The unfolding leadership drama...

Zimbabwean doctor speaks out after beating COVID-19: Most people die because…

News Muza Mpofu - 8 August 2020 0
DOCTORS are always the source of answers and hope for many who trust them with the lives of sick loved ones during a health...

News Muza Mpofu - 8 August 2020 0
Singer Yvonne Chaka Chaka and hubby Dr Mandlalele Mhinga are celebrating more than three decades of marriage together. This is a milestone for the Princess...
Loading...