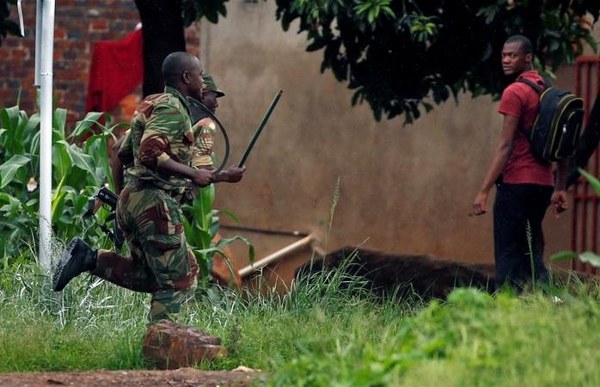 Ruwa residents were again attacked by the Zimbabwean Army late this afternoon(Sunday). Three Military trucks carrying approximately a hundred soldiers, accompanied by a police truck and a Support Unit Carrier, unleashed hell on residents who were innocently going about their business around George’s vicinity. Hundreds of victims were forced to lie down before being mercilessly kicked and gun butted in the head and assaulted with weapons which included logs all over their bodies.

About 30 Ecocash agents had their cash confiscated. Residents lost cash and cell phones to the terrorists.

Patrons who were drinking at Plaka Tavern were attacked and brutally assaulted.

One young man in his early twenties has been rushed to hospital with doubt he is going to make it.

Ruwa is virtually under a curfew with residents hiding indoors afraid of going outdoors.