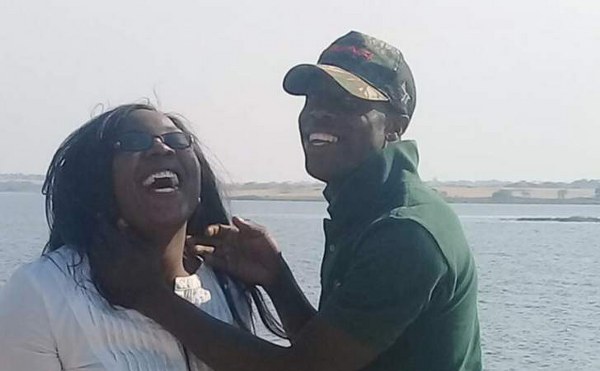 A married police constable’s illicit affair with his former boss’ wife came to light when their r0mantic photographs were discovered in his mobile phone. The photos have since gone viral.

Edmore Chikoromu is alleged to have abused his trust with his former boss only identified as Mike after their shenanigans with the latter’s wife Sakhi Tshuma were discovered by his wife Hilda Charity Maliki.

Maliki confirmed the story saying Tshuma claimed that she was a member of the Central Intelligence Organisation threatening her with unspecified action if she was to unearth the story.

“I blame myself by taking long in South Africa where I had found a job that is when Tshuma fell in love with my husband,” said Maliki.

“My husband failed to respect his boss when he was seduced by Tshuma and I heard it through rumours until I discovered the two’s photographs in my husband’s mobile phone.

“Tshuma has wrecked my marriage and she went on to threaten me saying she was a member of Central Inte11igence Organisation.

“l latter discovered that she was lying and my marriage is now in shambles because of her adulterous behavior.

“I have since taken my children from the police camp where we used to stay and my husband is refusing to support them,” said Maliki.

Contacted for comment, Sakhi who has since left the country to settle in South Africa confirmed her differences with Maliki over her husband.

“It is unfortunate that I separated with my husband following our differences with Maliki who became jealous about me,” said Sakhi.

“I had no children with my husband for some years and that is what affected our marriage.

“Maliki claimed that I was dating her husband after she discovered some photographs of me and her husband but there was no big issue since we were with my sisters at the dam.

“I am not sure how many photographs she claims to have seen but I only remember the one I was seated in the car with her husband and nothing more.

“Please do not publish the story before I visit Zimbabwe for more detail that I cannot say through phone call,” said Sakhi denying the allegations.

Chikoromu, a constable under police support unit confirmed the story saying his job does not allow him to disclose information through press.

“I am aware of the story brother but I am a police officer and we are not allowed to talk to the press,” said Cst Chikoromu referring us to his senior.

The said senior officer refused to entertain H-Metro when contacted for comment.