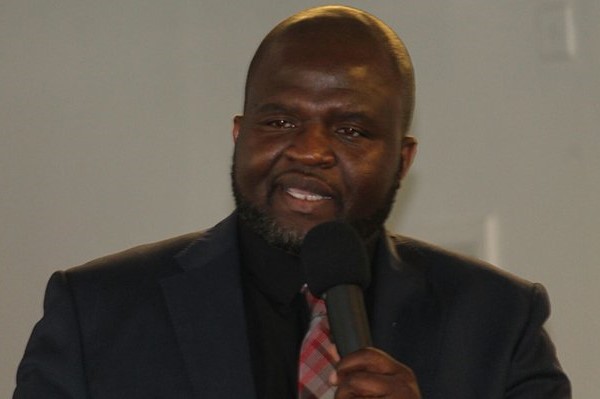 President Emmerson Mnangagwa’s lawyer Tinomuda Chinyoka was arrested on Monday after a human rights lawyer who is representing several individuals detained during last month’s fuel protests accused him of assault.

Brian Dube, who has also filed a complaint with the Law Society of Zimbabwe, said Tinomuda Chinyoka approached him from behind whilst he was in a court building in Gweru and “assaulted me by pressing me hard on my right collarbone with force and I felt pain.”

Chinyoka went on to issue several unspecified threats, boasting that he was connected to powerful people, Dube alleged.

The reported attack on the lawyer, who is also the Movement for Democratic Change (MDC) MP for Gweru Urban, follows threats made by Mnangagwa at a rally in Mwenezi last Saturday where he vowed to “go after” lawyers representing hundreds of citizens detained over the January 14 nationwide protests.

Chinyoka was part of Mnangagwa’s legal team that successfully got the Constitutional Court to declare him winner of last year’s presidential election. He denied assaulting Dube, but confirmed that he had been arrested.

“Brian Dube and Jeremiah Bamu concocted a false assault charge against me to secure my arrest and removal from court. Instead of representing their client, they are busy lying and consorting with mobs to assault lawyers and witnesses,” Chinyoka said on Twitter, indicating that he would likely appear in court on Friday.

Dube said he was inside the Gweru Magistrates Court awaiting the arrival of his client, the MDC’s Chiwundura MP Livingstone Chimina, when he had a nasty encounter with Chinyoka.

The lawyer told Gweru Provincial Magistrate Charity Maphosa: “There was a gentleman that was seated right behind me on the bench there about 15 minutes ago, who stood up, charged towards me and pressed me on my right shoulder and indicated that I had ‘pissed him off’ with the defence outline and he was going to deal with me.

“He was standing right behind me in this courtroom. I asked him who he was because I have been seeing him a lot around these courts for the past three weeks and that’s when he refused to introduce himself saying I was not supposed to know him.”

He said he later learnt from one of his colleagues that the individual was Chinyoka.

“Your Worship, I stand before you threatened with unspecified action by a stranger, a person I don’t know. Lawyers should not be harassed in court, no matter how powerful some people are. Our independence as professionals is being tampered with.

“I make this submission on record because my fear is twofold: the first is that I don’t know what he is capable of and as a professional I’m frightened and therefore can’t exercise my rights to freely and independently represent my client.

“My second fear is that I am also a public official apart from being Honourable Chimina’s defence lawyer. I represent thousands of people who he might fail to control once they hear that I have been threatened.”

He said Chinyoka should not, in the first place, have had access to the defence outline which is only served to the prosecutors, accusing the state lawyers dealing with the case of working with Chinyoka.

Chinyoka was a losing candidate in the 2018 Gweru Urban Zanu PF primary elections. Had he won, he would have faced Dube in last July’s general elections. Late last year, he applied for the post of Prosecutor General but failed in interviews.

In a letter to the Law Society, which governs the conduct of lawyers, Dube said he had learnt that Chinyoka “is a legal practitioner currently deployed to monitor on behalf of Zanu PF lawyers who are dealing with cases of the alleged ‘National Shutdown’.”

“The same individual is cited in my client’s defence as the one coordinating and coaching witnesses in Midlands against opposition members,” Dube said, adding that he felt “violated and professionally interfered with.”

Chinyoka told ZimLive: “This is how lies are created in this country because respectable people tell blatant lies.

“I’m a lawyer and have been for the past 23 years and Brian Dube is a lawyer but for less than 23 years, so instead of focusing on his client, puts me in a defense outline in his client’s case in which he makes a personal attack against me, which is completely false.

“So I went to him and said, ‘young man we are members of the same profession and you should know that before you name another lawyer in court papers you should ask that lawyer first’.”

He said Dube then asked him to identify himself.

“Of course he knows me/ When I was running for Zanu PF primaries, we met and spoke because I knew if I won the primaries I was going to face him in the final election.”

He disputed ever getting hold of the defence outline as alleged by Dube. Instead, Chinroka said he had a sight of it when the prosecutor, Namatirai Chipere, was reading the document whilst sitting next to him in court.

Chinyoka did not say why he was in court.

Meanwhile, Magistrate Maphosa granted the state an application for the four state witnesses who are testifying against Chimina in his incitement of violence trial to give evidence in camera.

Maphosa ordered members of the public, including journalists, out of the court room after she was told by the Prosecutor Chipere that the state witnesses feared for their safety as some had been threatened and had their properties vandalised by Chimina’s supporters.