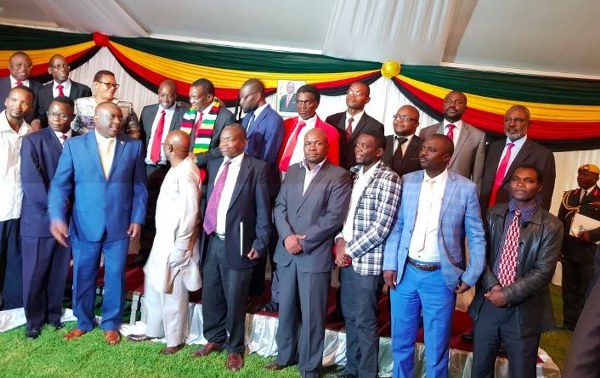 PRESIDENT Emmerson Mnangagwa’s team pressed on to dialogue with losing candidates in last July’s presidential election in the absence of main opposition MDC leader Nelson Chamisa and other key stakeholders who described the process as hopeless.

Chamisa has demanded that a neutral party mediates in the talks and that any dialogue must include the legitimacy of Mnangagwa’s presidency, despite losing an electoral
challenge at the Constitutional Court.

Mnangagwa did not attend the meeting at State House, angering the other leaders who had attended.

The meeting, which was supposed to lay ground work for the actual dialogue, was chaired by National Peace and Reconciliation Commission chairperson Sello Nare and reportedly attended by 18 of the 22 losing candidates.

Noah Manyika, of Build Zimbabwe Alliance, who attended the inaugural meeting, snubbed yesterday’s event, saying any dialogue without Chamisa would not yield any positive results.

“It is my position that any dialogue that does not include the MDC Alliance and other critical stakeholders will not pass the credibility test locally and globally,” he said in a statement addressed to Chief Secretary to the President and Cabinet, Misheck Sibanda.

Manyika came short of telling Mnangagwa that his current efforts were meaningless and would not move the country out of its current political and economic crisis.

“Any dialogue that does not produce a democratic, competent integrous governance outcome that will permanently solve the socio-political and economic problems that have bedevilled our country in the past four decades, is pointless,” he said.

Daniel Shumba also pulled out his United Democratic Alliance party from the talks, which he said were choreographed and unlikely to achieve anything.

“The President didn’t even attend or extend an apology. It was chaired by a Nare, who was clearly out of his depth and following a Zanu PF script. It is insincere, choreographed
and highly compromised process, with some political principals singing for their super,” he said.

However, Elton Mangoma, of Renewal Democrats, who attended the second leg of the dialogue, said they were progressing smoothly.

“We are basically still laying the ground work for an inclusive national dialogue. Among the issues is who should convene the meeting and how to include everyone, including labour, churches and civil society,” he said.

Mangoma said another meeting would follow in the next two weeks, where concrete decisions on the way forward would be made.

“It was not dialogue, but we, political parties, were just seconding people to committees so that we can kick start the dialogue. We could have easily done that using text messages,” he said.

Information deputy minister Energy Mutodi said there was progress at the meeting, with political parties in attendance establishing committees among themselves.

“The national dialogue will go on without the MDC Alliance, who have refused to accept defeat in last July’s elections.”

Chamisa Friday held a national council meeting with leaders of his party at their Morgan Richard Tsvangirai House headquarters, as the party steps up preparations for congress in May this year.