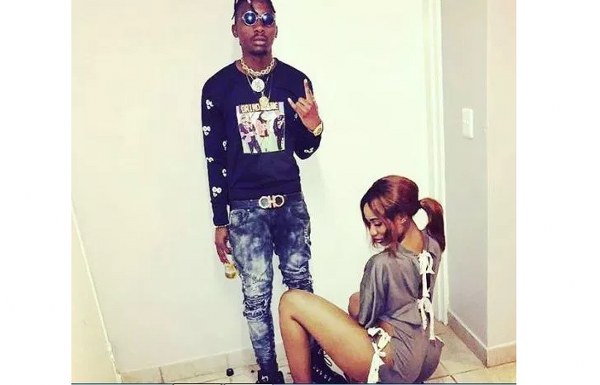 AWARD winning rapper and dancer Kikky Badass allegedly assaulted two students from Chinhoyi University of Technology (CUT) over allegations that one of them was making advances towards her rapper boyfriend Rodney Fucci.

Kikky Badass real name Christabelle Mahlungwa is reported to have made threats to the two students, Beulah Matare and Caroline Chikomba before she caught them off-guard and sprayed them with pepper.

The two students who spoke to the local tabloid H-Metro narrated the incident.

“My only crime was that I approached Fucci at the club to ask if we (Fucci and I) were still performing since we did a track together, but when I was leaving Kikky Badass told me to leave her man and called me a bitch. I just found that weird because I was not even interested in Fucci, I then went to join my friends on the dance floor,” said Beulah, one of the CUT students attacked.

The other assaulted girl told the paper that she was surprised she had been roped up in the crossfire.

“Beulah told me what Kikky had said to her and I told her to forget the incident, but surprisingly Fucci’s manager came to warn us after an hour urging us to be careful since Kikky can be a psycho she can do anything since she was not happy with us chatting with her man,” said Caroline

Caroline also added that after the warning, the two visited the ladies bathroom where the accused is followed them and sprayed them. The two are reported to have screamed after they were momentary blind but where fortunate enough to get help in the nick of time.

Quizzed by the paper on the incident, Rodney Fucci admitted to have rekindled his relationship with Kikky but denied having witnessed the incident.

”I Know nothing about that story saka nyora zvawada.”

The assaulted girls are still to make an official police report.

Kikky is not new to controversy. At one point she was involved in a feud with fellow rapper Tiara Balluti over who was a better rapper.

The singer became the first female to win the People’s Choice Award at the Zim Hip-Hop Awards in 2017, where she also scoped Best Female Artist of the year at the same awards.

Kikky also left tongues wagging a few months ago after starring in Enzo Ishall’s Magate video, where she gyrates, with her bums wrapped in a linen cloth, leaving little to imagination.

Her dance routines also divided opinion, with many saying it was immoral and not fit for local television.