MDC deputy chairperson Tendai Biti has failed to secure nomination to any post from the opposition MDC structures in North America, ahead of the party’s Congress set for May 24.

The province also does not want incumbent secretary-general Douglas Mwonzora to land any post at the Congress.

The full list of nominated members, whose list form has been leaked to the media, has been signed by the provincial chairperson for North America, Tawanda Dzvokora, as well as other members of the provincial executive.

Another notable absentee from the list is Douglas Mwonzora, who the province apparently would prefer he does not land any post in the MDC after the Congress.

However, according to the MDC constitution, a member needs only at least one nomination from the party’s provinces to be eligible to contest at Congress.

In 2014, Mwonzora went into Congress with only one nomination against Chamisa’s 10. Mwonzora went on to beat Chamisa by over 800 votes to land the secreatary-general’s post.

See the full nomination list in the image below:

The voting processs was concluded on Thursday this week. 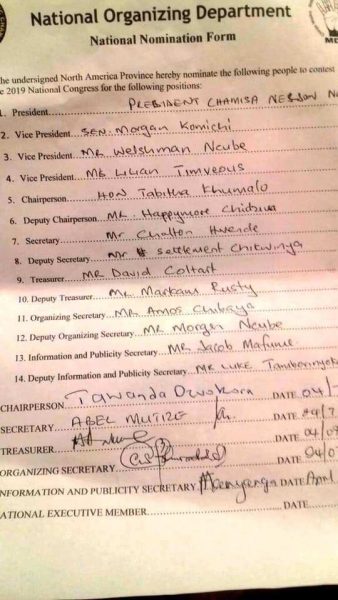