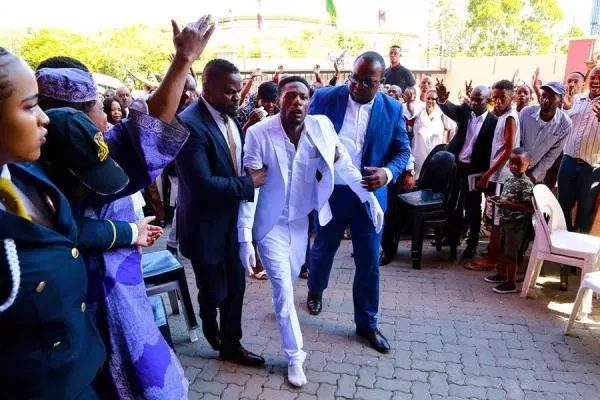 The man at the centre of a fake resurrection miracle staged by South African preacher Alph Lukau died vomiting blood, his family says.

Lukau acted out a revival of “Elliot”, who came to his church in Sandton, Johannesburg, in a coffin in February. His workmates at a furniture shop in Pretoria recognised him from TV pictures as “Brighton Moyo”, but his family in Lupane, Zimbabwe, buried him as Thabiso Proud Mlanje.

“Elliot”, whose purported resurrection made international headlines, vanished shortly after the staged event at Lukau’s Alleluia Ministries church. Neighbours at his former home in Pretoria confirmed he had moved out.

The B-Metro newspaper, quoting relatives, reported on Friday that the 28-year-old returned to Zimbabwe on March 8 after falling ill and stayed with his in-laws in Insuza, Matabeleland North.

He was admitted at Mbembesi Clinic on March 23, before he was transferred to St Luke’s Hospital in Lupane where he died on April 3.

“He was constantly vomiting blood. It was such a painful death. I wish someone could properly explain to me what happened in South Africa,” his grandmother Emily Moyo, said.

South African police reportedly contacted their Zimbabwean counterparts asking for help in tracking down Mlanje, who is thought to have been using a false name at his former workplace.

According to B-Metro, Mlanje and Lukau are subject of an active criminal investigation by South African police, a complaint believed to have been filed by Kings and Queens Funeral Services whose hearse was used in the elaborate resurrection con.

“They specifically said we should attempt to locate a large amount of money, which they thought Mlanje would have on him, presumably hush-money from Lukau. By the time we located him, he was in a grave,” a police source said.

Mlanje’s in-laws in particular said they had been victims of police beatings as investigators demanded to know where they allegedly hid the money.

The family supplied a photograph which they said showed Mlanje on a hospital bed just days before his death.

His wife Simelweyinkosi insisted she knew nothing about his “resurrection” and denied she was the woman introduced as his wife at Lukau’s church.

Speaking from Dandanda Village in Lupane, where Mlanje grew up and was buried next to his grandfather on April 5, his brother Stanley – when showed a video of the purported resurrection – said: “That’s Thabiso, I can see him.”

Henk Swanepoel, who worked with Mlanje at Vincent Amoretti Specialist Joiner in Pretoria, said he could not say with certainty that the man on the bed was Brighton Moyo, as he knew him.

“I’m afraid I can’t confirm or deny whether this man is Brighton or not. He certainly looks a lot like him, but the shape of the head seems different. That could be due to the haircut. I only ever saw Brighton at work, usually smiling and animated,” Swanepoel told ZimLive.

Mlanje’s grandmother said she raised him after both his parents died in Harare. He attended Gegeme Primary School in Lupane but failed to go to high school after her grandmother failed to raise the school fees.

She last saw him seven years ago when he left for South Africa, before he returned ailing and apparently very keen to avoid the police, explained by his decision to go and live with his in-laws in Insuza than go home to Lupane.

At Lukau’s church, Mlanje was only identified as Elliot. At work, he was Brighton Moyo. But government birth records in Zimbabwe had him down as Thabiso Proud Mlanje.

It is not uncommon for foreigners in South Africa illegally to adopt new names, and Brighton Moyo is thought to have been an alias. We now know that Mlanje is raised by his grandmother, Emily Moyo. Is that where the surname for Brighton comes from?

While planning the fake resurrection, people thought to be connected to Lukau are known to have gone to a branch of Kingdom Blue funeral parlour in Johannesburg. A woman told staff her name was Priviledge Ncube. She wanted a coffin for a dead relative, one Proud Mlamnjwa. After selecting her coffin, she paid R5,500 in cash and left.

Proud Mlamnjwa and Proud Mlanje are quite a close match.

Next, they hired a Toyota Quantum people carrier from a man who was named only as Nkosi. They put stickers of another funeral parlour, Black Phoenix, on the vehicle without that company’s knowledge, or permission.

The next stage of their plan was to go to Kings and Queens. There, a man identified as Elliot’s brother at Lukau’s church, stepped forward, telling staff that his name was Prudence Ngwenya. He had lost a cousin, one Proud Sibanda, but they had a little problem.

“The people using the Black Phoenix-branded vehicle misrepresented that they were from that company, which cooperates very well with Kings and Queens,” lawyer Prince Mafu, who was engaged by the three funeral parlours after the scandal, told ZimLive.

“Their story was simple. Black Phoenix had a hearse crisis, all their cars were out and they were down to the Quantum. So, they needed a hearse to go and pick up a body at the Black Phoenix mortuary for burial. At that point the coffin was transferred from the Quantum to the hearse.

“Kings and Queens were only too happy to help because of an existing relationship. They provided only a driver because there was an understanding that Black Phoenix undertakers would take over. That’s precisely why Kings and Queens did not insist on paperwork.”

Ngwenya paid R2,000 in cash to hire the hearse.

Mafu said the Kings and Queens driver, still under the impression they were driving to Black Phoenix to pick up a body, was surprised when he was told by the group that they wanted to pass through Lukau’s church. Mafu insists that the driver had no reason to look inside the coffin because he believed it was empty at that point.

The driver had, however, noted that the coffin was loosely closed.

“These people did all the lifting themselves because Kings and Queens were not the undertakers. They had only paid for transport,” Mafu said.

Kings and Queens were furious over what followed at Lukau’s church, as their hearse was used to lend some credence to the death and resurrection story.

His family, neighbours and the local councillor say he is dead. There was body viewing before he was lowered into his grave.

His sudden illness raises a lot of questions. Colleagues at his former workplace do not recall Mlanje ever being off work because of illness, until he stopped coming to work just days before he appeared on TV rising from the dead.

Following his purported resurrection, Mlanje appeared on TV looking healthy. Within a month and some days, he would be dead. His family says he was vomiting blood and weak. Did he have an underlying illness? Was he poisoned? What role did Lukau play in staging the resurrection event? It would appear the answers to those questions are gone with Mlanje.