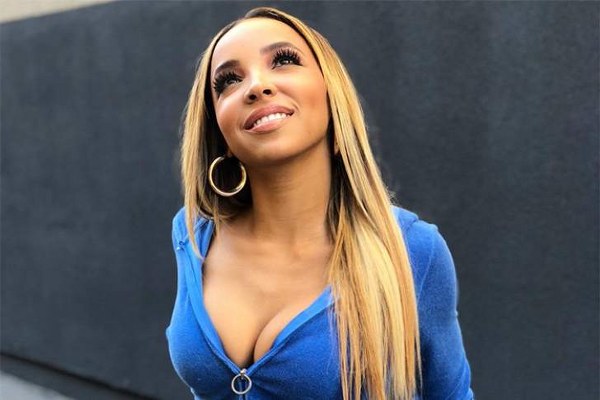 Singer Tinashe has stunned fans after declaring she is not Zimbabwean.

The 26-year-old R&B star was born in Lexington, Kentucky, to a Zimbabwean father and a Norwegian mother.

The singer, born Tinashe Jorgensen Kachingwe, was asked by a fan during a question and answer session on Twitter if “it’s true you’re from Zimbabwe?”

Tinashe, who has won a few music awards in Zimbabwe, replied: “My dad is!”

The first born of three children, it is not known if Tinashe or her siblings Thulani and Kudzai have ever been to Zimbabwe, although their Zimbabwean names point to a father very proud of his roots.

After coming under some criticism from some Zimbabweans who thought she was ashamed of admitting links to the troubled country, some fans sprung to her defence.

“The point is people really admire her being a Zimbabwean who made it to the top. Unfortunately, she didn’t start from the bottom (Zimbabwe),” said @TaffiArnold.

Tinashe was forced to address the subject a second time, after being branded “dull” for failing to recognise that “if your dad is Zimbabwean it just means you are Zimbabwean by descent.”

“Right, and they asked me if I was from Zim not if I was of Zimbabwean descent. Y’all don’t even make sense, lol, mad for no reason,” Tinashe said in response to @WinstonPromise.

One Lobengula also told Tinashe to prepare to be taken back to Zimbabwe.

Its okay, Tinashe… Its okay pic.twitter.com/AnckASW1pj

Disaster as man dies after being shot by police while in company of his...

News Sekai Moyo - 24 May 2020 0
Police shot and killed a 34-year-old man following a high-speed chase in Bulawayo on Saturday night, his family said. Police said the incident was under...

News Muza Mpofu - 24 May 2020 0
A two-day-old baby has died with coronavirus in South Africa – one of the world’s youngest victims of the virus. The mother had tested positive...

News Nelson Bhebhe - 24 May 2020 0
Moves to rally MDC veterans behind Nelson Chamisa in the fight for the control of Zimbabwe’s mainstream opposition party have taken a new dimension...

News Muza Mpofu - 24 May 2020 0
A security guard employed by the Judicial Services Commission was slapped with a 36-months jail sentence for stealing building material worth $18 000 from...

News Muza Mpofu - 24 May 2020 0
MDC-T secretary-general Douglas Mwonzora yesterday pleaded with MDC Alliance MPs who have disengaged from Parliament in protest against the recall of four legislators by...

News Muza Mpofu - 24 May 2020 0
In a chilling case of murder, Agnes Guni (25) a recent Animal Science graduate from the Midlands State University was killed in South Africa,...

Whoever stole my bucket will always have that bucket overflowing with water all the...

News Nelson Bhebhe - 24 May 2020 0
Hearing about witchcraft is one thing but to hear about the possibility of being bewitched is a death scare that has never settled well...

Sale of State land and corrupt allocation of housing stands: Ex Minister and 2...

News Sekai Moyo - 24 May 2020 0
A former Cabinet Minister, a Minister of State for Provincial Affairs and a prominent property mogul face arrest for criminal abuse of office, fraud...

News Tshuma Rueben - 24 May 2020 0
ZIMBABWEANS returning from South Africa have expressed frustration over confusing processes they are subjected to before admission to Covid-19 quarantine centres in Beitbridge. The confusion...
Loading...