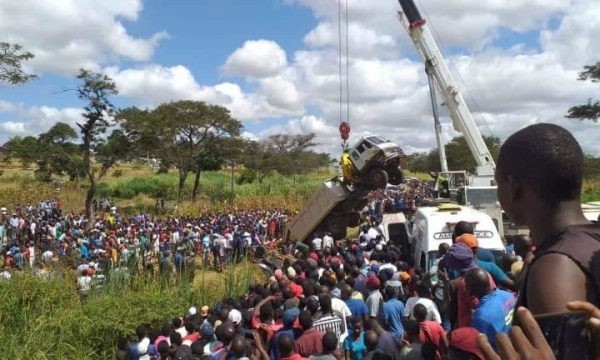 NINETEEN people were injured in a three-vehicle pile-up accident near Entumbane Shopping Complex in Bulawayo yesterday.

The pile-up occurred when a Toyota Quantum headed towards Luveve suburb side swiped a Toyota Hiace kombi driving towards the city centre and the two vehicles got stuck together.

Another kombi driving towards the CBD then rammed into the first two.

The Toyota Quantum is said to have encroached onto the opposite lane causing the near fatal crash at the robot-controlled intersection near Total Fuel Service Station.

When The Chronicle crew arrived at the accident scene, Fire and Ambulance Services had already rescued the injured and ferried them to Mpilo Central Hospital.

Police details were also at the scene conducting investigations while scores of people had also gathered.

Witnesses said the Toyota Quantum driver was speeding and failed to slow down while avoiding a car that had encroached onto his lane.

Mr Butholezwe Dube, a kombi conductor who was in one of the vehicles and escaped with minor bruises, said it was a miracle that no one died in the crash.

“We were coming from Magwegwe North heading to town. As we approached this spot, the Quantum driver who was speeding, swerved to the left then right before encroaching onto our lane. If my driver was not alert we could have had a head on collision which could have been fatal. But he managed to swerve to avoid a head on and as a result the Quantum rammed the side of the kombi,” said Mr Dube.

“This led to the driver who was behind us to ram into the back of our kombi. Several people were injured but I can’t tell how many offhand.”

“Three of our ambulances attended the scene and they ferried 18 people to the Mpilo Central Hospital casualty ward. Most of the victims had soft tissue injuries except one patient who was ferried by a private ambulance and complained of back pain,” he said.

Mr Mpofu appealed to drivers to exercise caution on the roads as lives could be needlessly lost.

“They should execute defensive driving skills to avoid unnecessary loss of lives,” he said.