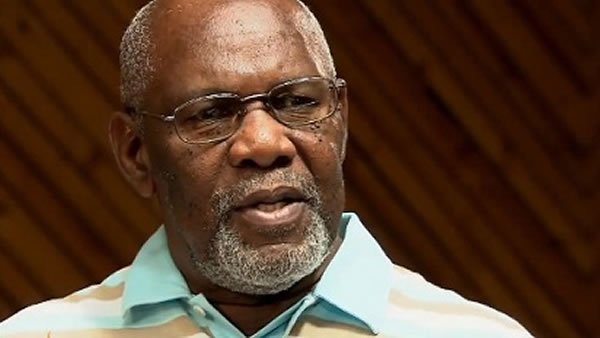 Chamisa finally found a seat at the front of an adjacent tent, where he was joined by his deputy Welshman Ncube, former Speaker of Parliament Lovemore Moyo and the Ndebele king Bulelani Lobengula.

“He was a principled man, he loved people. He wanted to see prosperity in this country, he wanted see people free and happy,” Jabu told thousands of mourners at the politically-charged event.

He recalled how Dabengwa, having been acquitted on charges of treason, was held indefinitely under colonial-era emergency laws by the new government after Zimbabwe’s independence.

“I visited him at Chikurubi, after he was arrested. One day I said to him ‘when are they saying you will come out of prison?’ He said, ‘I don’t know. They said if I don’t join Zanu I will never come out.’ He told me he had his principles, he would have to die first before anyone could force him to leave ZAPU,” Jabu recalled.

Mtshana Ncube, a history researcher and former ZAPU representative to the United Nations, said Dabengwa had looked forward to “discussing with comrades the task of bringing justice, reconciliation and peace for the victims of Gukurahundi.”

“That was one of his next tasks, had he lived,” Ncube said, referring to the massacre of thousands of minority Ndebeles and supporters of ZAPU leader Joshua Nkomo shortly after independence.

Dabengwa, who died in Nairobi, Kenya, on May 23, also yearned for the return of ZAPU properties and ZIPRA files from the war, which were seized by the government during Gukurahundi.

“Despite suffering the pain of being put in jail without being found guilty of a crime, he never gave up his belief that this country needs a leadership that rises above hatred, racial intolerance, tribalism and revenge,” Ncube said.

Jeremy Brickhill, a white ZIPRA veteran who named his son Dumiso, turned up the temperatures with a rousing speech, extolling the virtues of the liberation war hero before adding to loud cheers: “In his last days, Dumiso always tried to find solutions. Dumiso always sought a way forward. He was engaged in dialogue even with those who would not listen.

“Today, more than ever, we need to find solutions to the problems in our country; we need to complete our quest for true liberation. To the young people here, I say pick up the spear and free yourselves as Dumiso did!”

The discomfort levels rose even further when Mthulisi Hanana, the director of the Dumiso Dabengwa Foundation, gave a barnstorming speech, at one point praising Chamisa as “mature and sober” while hectoring Dabengwa’s former colleagues in Zanu PF for walking out of the ZAPU leader’s life to maintain their privileges.

“He was passionate about young people. He believed that their time is now. Dabengwa and others altered the course of this country at a young age, this generation must do the same,” Hanana said, reading from a prepared speech.

Describing Dabengwa as one of Gukurahundi’s most prominent victims, he recalled the many hours spent with the Russia-trained intelligence supremo in which he looked back with disappointment at his treatment by his former war colleagues.

“I must say that he was scarred by that genocide until the day that he passed on. Till the day he died, he never understood why comrades who fought the colonial government side-by-side with him turned against him and others. He did not understand why civilians were butchered by an army that was supposed to be professional,” Hanana said.

“He appealed that Gukurahundi must never be a closed chapter, just like the liberation struggle. We must always remind our people that people died for being ZAPU, they died for being Ndebele and died for supporting Joshua Nkomo. The next genocide can only be avoided when this one subject is spoken about.”

As General Sibanda, a ZIPRA veteran who was also commanded by Dabengwa looked on from behind him, Hanana challenged Zimbabwean youths to “please rise up and be counted.”

In a final flourish, he called on Dabengwa to “get to the other side and speak of the misery of the people.”

“Tell [Josiah] Tongogara and [Solomon] Mujuru that the army now assists in political transitions, and now shoots innocent civilians. Tell Lookout Masuku that your names do not appear in any of the history books. Tell Jimmy Ntuta that his murderers have not faced justice. Tell Thenjiwe Lesabe that she’s a national heroine and we’ll do our best to preserve her legacy and tell Chief Khayisa Ndiweni that umntanakhe uthwelenzima (his son is being persecuted),” Hanana said.

ZAPU’s acting president Isaac Mabuka said Dabengwa “stood up against conformity”, pointing to his decision to leave Zanu PF and revive ZAPU in 2008.

“That Dabengwa breathed his last on foreign soil, on his way home, is an indication that he had not yet fulfilled his mission of truly liberating this country. It must have weighed heavily on him as he reflected on the irony of seeking medical help very far from his people, something that has become a privilege of the very few in this country as the rest of the population cannot access adequate health facilities,” Mabuka blasted.

Zimbabwe was “experiencing unprecedented levels of hardship for the common man”, he said, adding: “Young people are in the streets, unemployed, because the country has been plundered.”

To honour Dabengwa’s legacy, said Mabuka, those who believe in his vision should commit to push through devolution and proportional representation which were close to Dabengwa’s heart.

Resident Minister Ncube was given an opportunity to speak, and she carefully avoided the topics that had whipped the crowd into a frenzy. She hailed Dabengwa’s commitment to development, particularly his fight to bring water to Bulawayo as a one-time patron of the Matabeleland Zambezi Water Project.

Dabengwa, who was 79, will be laid to rest in Ntabazinduna on Saturday after snubbing burial at the National Heroes Acre in Harare.

News Cynthia Goba - 21 January 2021 0
POLICE in Mt Darwin are keen to recover the remains of a 26-year-old local man believed to have been fatally attacked by a crocodile...
Loading...