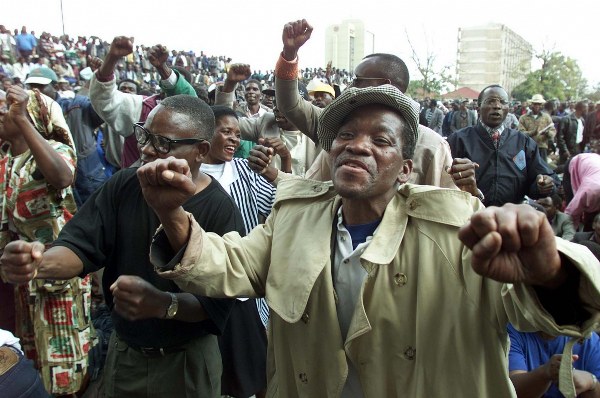 Mutoko North legislator Rambidzai Nyabote (Zanu PF) was recently booed by a group of war veterans, who accused him of siding with embattled Zanu PF Mashonaland East political commissar Herbert Shumbamhini, who has lost favour of the ex-freedom fighters.

At a fractitious meeting held at Mutoko Centre presided by Zanu PF provincial chairperson Joel Biggie Matiza, Nyabote was reportedly booed by the liberation war fighters, who ordered him to sit down before he concluded his contribution.

According to an official who attended the meeting, Nyabote, who took over from Senate president Mabel Chinomona, was saved from further embarrassment by provincial deputy political commissar Joseph Kandemiri, who broke into song.

“Nyabote stood up to pass his contributions. However, things went wrong because his speech was in support of Shumbamhini. The war veterans would have none of it and booed him. He had to sit down. The tension was dissolved by war collaborator and deputy political commissar Kandemiri, who began singing to boost morale. It was an embarrassing moment,” the official said.

After the meeting, Nyabote could be seen exchanging harsh words with war veterans’ provincial member Bertha Chinyanga, who was representing war veterans provincial chairperson Daniel Sigauke. Sigauke did not attend the meeting.

Chinyanga had earlier in the meeting ordered Nyabote to sit down as he tried to make a contribution.

During the meeting, tempers reportedly flared as war veterans demanded the ouster of Shumbamhini as Zanu PF’s provincial political commissar, accusing him of terrorising them.

War veterans Mutoko district chairperson Obert Maodza, who also attended the meeting, said the booing of Nyabote was triggered by how he (Nyabote) tried to contribute to a matter which he was not privy to.

“The war veterans have their issues and he (Nyabote) stood up to speak of issues he is not aware of. The post of the political commissar is for the war veterans. Nyabote was showing support to Shumbamhini, something which the war veterans did not like. He was ordered to sit down to which he did,” he said.

Matiza reportedly promised to take up the matter with his superiors.

Recently, the war veterans locked up the Zanu PF office in Mutoko as they protested against Shumbamhini, whom they are accusing of a litany of allegations, among them abuse of power.

News Sekai Moyo - 27 July 2021 0
NEVER leave your dirty underwear at your partner’s place as it can be used for evil deeds. That was the warning from Digital Bones sangoma...
Loading...