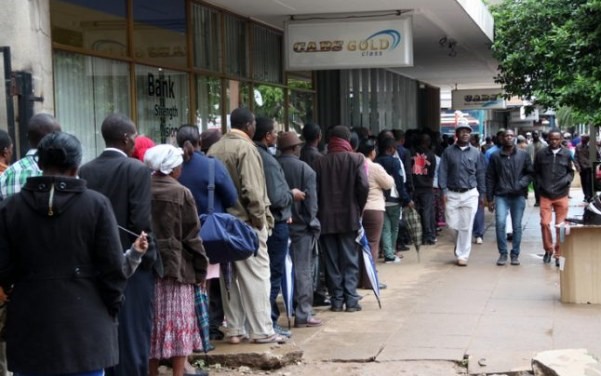 THE interbank exchange rate has surpassed parallel market rates with some banks offering more in local currency for those exchanging their foreign currency.

Government last week outlawed the use of multiple currencies through new regulations that compel all forms of transactions to be done in local currency. These measures have paralysed the black market in many cities where money changers are now singing the blues.

Black market foreign currency traders who spoke on condition of anonymity said they would receive US$10 000 and RTGS$10 000 everyday to feed the parallel market but the suppliers have since stopped.

“We used to receive large amounts everyday so that we would buy and sell at a profit in the streets. Business was brisk because we would be able to cash in and make 80 percent profit on a daily basis. We would be assured that every day the rate goes up and that would give us every reason to stay in the streets but things have changed ever since the multi-currency system ended on Monday. Most of my colleagues have since disappeared because suppliers from Harare who would give us the cash have since stopped,” said one illegal street money changer.

Through Statutory Instrument (SI) 142 of 2019, known as Reserve Bank of Zimbabwe (Legal Tender) Regulations, Government abolished the use of the British pound, United States dollar, South African rand, Botswana pula and any other foreign currencies, as legal tender.

A survey conducted by The Chronicle in Bulawayo yesterday revealed that the interbank rate was on average hovering around RTGS$8, 9:US$1 surpassing the parallel market rate, which had had fallen to RTGS$7,3 for every US dollar for electronic transactions.

The black market rate was even lower for cash transactions where it was pegged at around RTGS6/6,50:US$1.

Of the banks checked, CABS had the highest interbank rate buying the US dollar at RTGS$9 per US dollar, followed by NMB at RTGS$8,93 while FBC was buying at RTGS$8,56.

CBZ was buying the US dollar at RTGS$8,3 while Ecobank was buying at RTGS$7,8.

Notable queues were noted at some of the banks as people realised there were better offers there.

They said considering the risks associated with the black market, the bank rate was reasonable and could probably lure people away from the informal market.

“If the rates continue like this it may limit the black market effectively. There is no reason to change foreign currency on the black market when the rates on the official market are good enough. I hope this will be a permanent situation but the banks should be fair by making foreign currency readily available to the people,” said Mr Clever Nkomo.

He said in other countries, people walk into banks to change currencies without any hassles.

The local currency was in freefall before the timely intervention of monetary and fiscal authorities who abolished the use of multi-currencies.