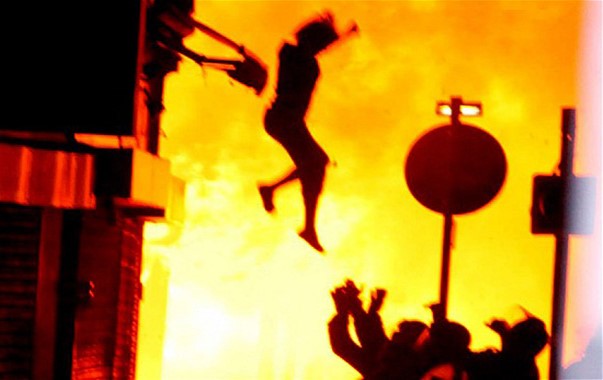 At least one dead in clashes after demonstrators storm national assembly building in protest against vote to allow president another term.

Anti-government protesters in Burkina Faso have set parliament ablaze in a surge of violence that forced the government to at least temporarily scrap a vote on constitutional amendments that would allow President Blaise Compaore to extend his 27-year rule.

At least one person was killed in Thursday’s violence, according to news agencies.

Hundreds of people broke through a heavy security cordon and stormed the national assembly building in the capital Ouagadougou, ransacking offices and setting fire to cars, before attacking the national television headquarters.

“It is difficult to say what happens next, but things are out of control because the demonstrators do not listen to anyone,” Ablasse Ouedraogo, opposition lawmaker said.

Police had tried to control the crowds using tear gas, but the demonstrators were able to push through the barricades and make their way into parliament.

“It is over for the regime!” and “We do not want him again!” protesters shouted when they heard that the vote on term limits had been stopped.

Flames enveloped the main building in the parliament complex, and many politicians fled to a nearby hotel.

The crowd then headed towards the presidential palace as a government helicopter flew overhead, shooting teargas at protesters.

Security forces fired live rounds and tear gas at protesters near the presidency in the Ouaga 2000 neighbourhood, Reuters reported.

Politicians had been due to vote on Thursday on a government plan to change the constitution to allow Compaore – who took power in a coup in 1987 – to stand for re-election again next year, when he was due to stand down.

The government, facing its worst crisis since a wave of mutinies shook the country in 2011, later announced it was calling off the vote but it was not immediately clear if this was a temporary move.

State television was ransacked and forced off the air.

“The president must deal with the consequences,” said Benewende Sankara, one of the leaders of the opposition which had called for the people to march on parliament over the Compaore law.

Burkina Faso is typically known for relative stability and economic growth in a volatile region, but tensions have been rising ahead of the vote, which the European Union had warned could jeopardise stability.

News Sekai Moyo - 15 January 2021 0
A MAN from Bulawayo’s high density suburb of Nguboyenja battered his wife for asking him why he had called out another woman’s name while...

He makes me the happiest woman alive: Sugarmama brags after dumping madala for Ben...

News Sekai Moyo - 15 January 2021 0
WHILE LYING in his sickbed in Lesotho, he heard that his wife had taken up with a Ben 10. He sent her a warning message...

News Muza Mpofu - 14 January 2021 0
Four people aboard a single-engine Cessna plane are lucky to be alive after it crash landed in the Luunga area of Binga yesterday morning. The...
Loading...