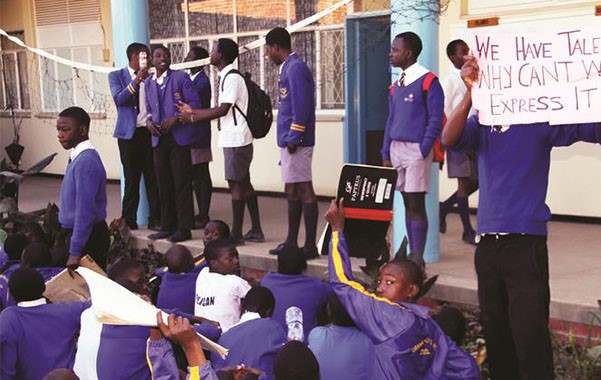 CRANBORNE Boys High School pupils staged a demonstration yesterday against the school head, Mr Dennis Masenga, who is being accused of mismanagement and misappropriation of funds.

Mr Masenga is also accused of forcing pupils to secure stationery for examination purposes, turning bathrooms into a fowl run for his personal use and victimising pupils and teachers.

Learners also raised concern over the school’s failure to participate in national sporting events and to maintain sporting facilities such as the rugby field which is now an eyesore.

An Upper Sixth pupil who spoke to The Herald said the concerns raised were genuine.

“The pupils raised their concern on the school’s failure to participate at national sporting events and failure to maintain sporting facilities such as rugby and soccer fields which are an eyesore. Sporting activities are part of the new curriculum, but it seems the school head is not concerned about that.

“We are appealing to the Government to intervene and address the anomalies,” he said.

The boys said they had engaged the district schools inspector, who was only identified as Mr Chinoona, to address their concerns.

“We engaged the district schools inspector known as Mr Chinoona to look into the matter today. We held a frank meeting with him and the headmaster.

The pupils have threatened to continue with the demonstrations until their concerns are addressed.

Mr Chinoona, who witnessed the demo, refused to talk to the media.

“I am not at liberty to talk to the Press. You can phone the permanent secretary or the responsible minister,” he said.

News Muza Mpofu - 28 October 2020 0
WHEN Sipho Sibanyoni’s girlfriend told his mum she was going to kill him on Saturday, she thought it was a joke. But the 31-year-old from...
Loading...